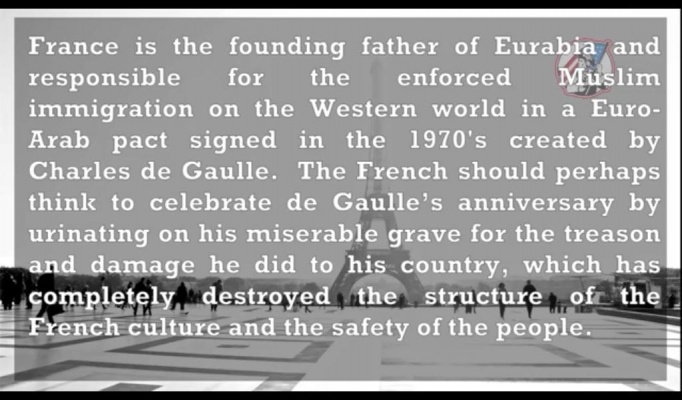 They said, ‘France would never win the world cup in 2018’, but they did ; and now they’re trying to tell me that ‘Marine Le Pen, will never win the next presidential election’ but she beat Macron on a majority during the EU Elections in 2019, and the presidency may very well be next, I think ‘the people’ have understood their losing their voice and their choice.

This is not about Le Pen winning and not even about Macron winning, this is about bringing into affect in the next presidential election, the policies of a person that well represents the French Republic in terms of Sovereignty and Security, Culture and Values; a person that will take whatever measures are deemed necessary to stop the development of terrorists in the outskirts of Paris and the rest of France (without fear of being labelled a racist), to eradicate the ‘No Go Zones’ that are law less posing a real danger to the French and stop the exclusive Muslim neighbourhoods where non Mulsims are not allowed to enter; a person that will keep in with the religious denomination of this country, Catholicism, an ancient religion that has protected France since the rising of Saint Jeanne D’Arc, who liberated this country from curel English rule, then there was the ‘Apparitions of the Blessed Virgin of Lourdes to Saint Bernadette Soubirous’ and the 77 miracles that accompanied it and finally the French Revolution giving birth to the Freedom of the French Republic; a person that will give the French a VOICE BY CHOICE.

THIS IS NOT A MUSLIM COUNTRY – THIS IS NOT RACIST BUT FACT – FRANCE IS THE ELDEST DAUGHTER OF THE CATHOLIC CHURCH AND SHE BELONGS TO THE FRENCH!

Now France, is in real danger of foreign takeover and there is not even work anymore for the native French. With their social housing, Muslim migrants have transformed the outskirts of Paris, into criminal ghettos where not even police want to enter.

Drug dealers keep microwaves and wrought iron bed furniture on their roofs, which they use to throw at police when they arrive. In addition, they set fire to trash containers and motor bikes to attract fire fighters, then attack them when they arrive.

Police who were responsible for the arrests, claim that most of the violence (if not all) from the Gilet Jaunes Manifestations since commencement – the breakage of shop windows, theft, blowing up Sentinel Patrol Vehicles and marked police cars, etc – was done by immigrants living in the outskirts of Paris, in these troublesome area’s, who in their publicised violence have divided and defamed French (the people, the pompiers and the police alike). The European Union, who take 21 Billion Euros in annual contributions from French tax payers, was in actual fact behind the culprits of this violence to ensure the French do not UNITE against the European Union and win back their independence in a collective fight. The media, who take millions in subsidies every year from the European Union, was used to support the goal of the European Union, to divide and conquer. It is the European Union, who is supporting the Muslim Migrants to destroy and silence the liberty fighters of Europe, to divide and conquer the French.

The president of the French Republic, needs to seriously consider giving police better pay, more powers and added protection to combat the rise in crime in these high risk ‘no go zone’ areas for the safety of victims, who are as young as 13, and for the safety of the Wider French Community.

In response the ‘Islam Separatism’, Macron says, ‘he wants to force associations to sign a charter of republican values; but no closures of Salafist Mosques and no expulsion of hate preachers…’

Is this enough to frighten anyone?

Marine Le Pen’s strategy against radicalisation and political Islam is to ‘deport them’, she say’s that Islam is the abdication of the French Republic. This is not a racist opinion but fact!

We’ve got radicals coming to France, telling the French to mind their own businesses and shut the f**k up, breaking the law in the face of local police (and we are not talking small crime) and forming rapidly in the outskirts of Paris, their terrorist groups recruiting in broad daylight French Citizens.

Since their establishment, 15% of French Citizen had a positive opinion of the Islamic State Terror Group – ISIS – and this was after the Bataclan Disgrace in 2015.

A local butcher, the only French owned businesses in the area selling pork and Non Hallal meat, was recently burgled and beaten by Muslim Migrants – as seen on the video link – and in school canteens in these ‘high risk, no go zones’, no more pork is served. Sometimes even pressure is exercised on the children who are not Muslim, not to eat prok.

Macron is ignoring the reaction of the French, to anti-French practices by Muslim migrants and the media calls it ‘Islamophobia’, but is it really?

For example; in the view of Islam and it’s holy Quran, women had been created solely so that men could beget male children upon them. Except for the occasional wealthy sheikh, who could afford to collect and keep a whole hive of certified virgins, to be used on time apiece and then discarded, few Muslim men utilized women for their sexual enjoyment; it is of the opinion that males were vastly superior to females, and infinitely more to be treasured; any Muslim male was far more sexually responsive and delightful than any Muslim female, whose private parts had been deadened by circumcision so that when she has grown to womanhood, she could be devoid of natural sexual desires – a passive pulp with no function but to dribble out as many children as possible in her bleak lifetime – the catholic nuns in a convent are regarded as shameful women and even prostitutes for having their clitoris’s intact.

It’s no wonder Muslims are dubbed a threat to democracy in the Western World – this is not Islamaphobia (a profitable label for the media) – this is the protection of civil liberties and fundamental human rights; immigrants, including Muslims, that come here to enjoy their freedom have a responsibility to adapt to democratic rules and respect the laws of this country.

France is shocked by the habits that the Muslim migrants occupying these ‘No Go Zones’ in the outskirts of Paris, bring with them. There are girls forced into marriages as young as young as 13, with 40 year old men, which is a serious crime in France – paedophilia – and certain Muslims apply the barbarian practice of Female Gender Mutulation (certains Musulmans appliquent la pratique barbare de I’excision…), another serious crime in France. The quarters inherited from immigrations are also pockets for radical Islamism. They bring here their habits and customs and try to enforce them upon the French. They hate the French and simply don’t want to integrate.

Experts say that European Governments should crack down on welfare payments/ government benefits that entice immigrants who do not respect French Culture and Law, particularly for those with polygamous families. The French government should impose more restrictive immigration policies while demanding new comers embrace western culture and its FREEDOMS OF EXPRESSION. Signing a piece a paper is simply not enough.

I don’t normally take sides when it comes to politics but I do have a strong sense for justice and what Macron doesn’t seem to understand that Marine Le Pen does, is that ‘ISLAMIC LAW CAN NOT SUPERSEDE THE FRENCH LEGAL SYSTEM in FRANCE’.

Marine Le Pen, say’s, ‘there should be NO place in France, where the French can not enter’; and she’s right about that.

Le Pen also say’s that this migration has been wanted in order to bring the salaries artificially down; most of whom are on welfare benefits paid by French tax payers.

LACK OF GOVERNMENT ACTION IS GUILTY OF TREASON.