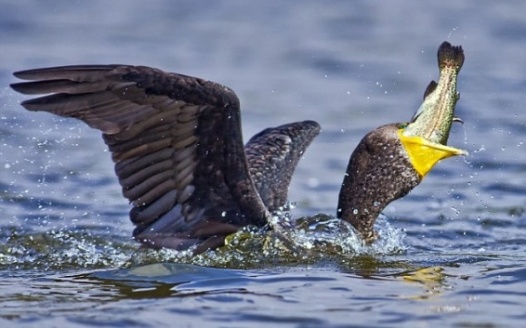 (Save OUR Fish) Cormorant Population Control needed throughout the U.S.

2022 people have signed this petition. Add your name now!

Hello everyone, this is the 2nd petition I've put together. The first was a couple years ago after I got fed up with nothing getting done to bring back Cormorant Populations control. That first petitions took a long time to get off the ground, but after Congressmen Jack Bergman started to help with introducing legislation. So, I updated the first petition with the house H.R. 4429 has been revised H.R. 6302 (Rep. Jack Bergman of Michigan), To enact as law certain regulations relating to the taking of double-crested cormorants. Cormorant Control Act. After months of waiting and waiting Congressmen Bergman started pushing for a decision on the bill. So this is where we are currently: All the info is below I will also put links in the highlights, as well as in posts on social media. This Petition might ask for donations, it's not required to sign this petition. But if you do donate any and all funds will be used to push this agenda of Cormorant Populations Control. I didn't spend money on my last Petition, but this petition will get some of my personal budgets. I believe this to be a huge problem, I don't want all Cormorants killed but we clearly NEED Populations control. The cormorant population is at a dangerously high level. The latest estimates from the MDNR have the yearly consumption of fish Cormorants eat from the Great Lakes Waters are at an astonishing 77 million pounds of fish!

We desperately need Cormorant Control again; please help by following the links provided and follow the instructions to submit an official comment to our Federal Government first and foremost. This will be the best way to be heard, let's prove to our government that we know this is very important and get as many people as we know to get this done. Even if you need to ask for help doing it, we have people who are willing to help you just ask. Thank you.

We also encourage people to contact their Congressperson, Senator, Governor with a phone call, email and a handwritten or typed letter to your Congressperson. It’s all free, just a little bit of your time. We would also appreciate your signing this petition and also sharing this petition. This was the best idea I had to get the word out to the most people possible. My last Petition went over 2000. I would hope we could at least double that number with a little bit of effort and a little bit of money pushing this huge issue. Thank you very much for your time it's greatly appreciated!

Bergman Issues Statement on Next Steps for Cormorant Management

Marquette - Today, the Department of Interior announced it will be moving forward in its process to address management options for the double-crested cormorant.

“The lack of management options for double-crested cormorants has negatively impacted Michigan’s First District, where we rely on healthy fisheries and our thriving natural resources. This next step by the Department of Interior is long-awaited and much- needed in Michigan, where our state and local partners stand ready to be the example of ‘how to’ when it comes to cormorant management." said Bergman. "We can protect one species without harming another; but as we’ve seen over the past three and a half years, doing nothing is not the answer. Without the ability to manage cormorant populations, the livelihood of our recreational and commercial fishing industries has been threatened. As the Fish and Wildlife Service begins its public comment period on future management options, I will continue to advocate for comprehensive, data-driven species management in our communities.”

WASHINGTON - As part of ongoing efforts to address conflicts between double-crested cormorants and wild and stocked fisheries, the Department of the Interior’s U.S. Fish and Wildlife Service (Service) is announcing an advance notice of proposed rulemaking (ANPR) and soliciting public input on future management options.

“Balancing the protection of native wildlife with economic and human health needs is fundamental to effective management practices,” said U.S. Secretary of the Interior David Bernhardt. “Today’s action starts the process of improving management and further reduces conflicts with double-crested cormorants throughout the United States.”

“We are building long-term solutions for managing conflicts with double-crested cormorants under the Migratory Bird Treaty Act while maintaining healthy populations of this species,” said Aurelia Skipwith, Director of the U.S. Fish and Wildlife Service. “This effort, in collaboration with our partners, will ensure continued good stewardship of our natural resources.”

In 2017, the Service completed an Environmental Assessment (EA) under the National Environmental Policy Act (NEPA) evaluating options for issuing individual depredation permits to provide relief for aquaculture facilities experiencing direct economic losses from cormorants across 37 central and eastern states and the District of Columbia.

This review did not include potential damage to recreational and commercial fishing by cormorants. Since the publication of the EA, the Service engaged stakeholders to assess the biological, social and economic significance of wild fish-cormorant interactions, and to identify a suite of management alternatives.

The Service is also currently working with tribes, state fish and wildlife agencies and other federal partners to assess comprehensive management options for cormorants across the United States.

“I am pleased to see the Department is moving forward in the rule-making process for the depredation of double-crested cormorants. This is a desperately needed next step for Michigan’s First District, where over-population is threatening the health of our free swimming and recreational fisheries,” said U.S. Rep. Jack Bergman (MI-01). “I am grateful the Administration has committed to this process to ensure a long-term and effective management plan for Northern Michigan and the Upper Peninsula.” “With nearly 30,000 water surface acres across Arkansas used for aquaculture production, our fish farmers contributed $71.1 million to our state’s economy in 2017. However, the United States Department of Agriculture estimates double-crested cormorants cause more than $25 million in damage annually within the aquaculture industry. These birds have become the foremost antagonists of fish farmers. We need commonsense solutions that allow aquaculture producers to safeguard their fish from these predators,” said U.S. Sen. John Boozman (AR). “I applaud the U.S. Fish and Wildlife Service for responding to the need of aquaculture producers by increasing the amount of maximum allowable take of double-crested cormorants, and I look forward to working with the Department of Interior and USFWS to ensure we can find commonsense solutions to ease the burden for hard-working Arkansan aquaculture producers.”

“Arkansans are experiencing the harmful impact of double-crested cormorants across the state. As one of the top aquaculture producers in the nation, Arkansas and its fish farmers are suffering millions of dollars in losses as these avian predators consume critical inventory,” said U.S. Sen. Tom Cotton (AR). “I am glad the Department of Interior is taking this problem seriously and hope that further progress will come swiftly.”

“The double-crested cormorant has been detrimental to Mississippi’s catfish farmers,” said U.S. Sen. Roger Wicker (MS). “I am pleased that the U.S. Fish and Wildlife Service is taking this issue seriously and is considering options to allow aquaculture producers to manage the populations of these predatory birds that are destroying fish populations.”

“I am pleased with the efforts and action by U.S. Fish and Wildlife Service (FWS) to increase the allowable take of double-crested cormorants. This is a necessary step to mitigate more than $25 million in annual damages to the catfish and aquaculture industry,” said U.S. Rep. Michael Guest (MS-03). “I’m supportive of this proposed rule, which will have a positive impact on Mississippi’s catfish industry, and I will continue to work with FWS to promote Mississippi’s aquaculture needs.”

“Science has consistently proven that managing cormorants is necessary to protect not just aquaculture but fishing as well. I applaud the administration for listening to input, increasing the take and promoting sound scientific practices,” said U.S. Rep. Bruce Westerman (AR-04).

“Double-crested cormorants can pose a significant threat to American aquaculture. The American Farm Bureau Federation is pleased to learn that the Department of the Interior is moving forward to help provide farmers the necessary management tools to prevent double-crested cormorants from preying on-farm livestock,” said President of the American Farm Bureau Federation Zippy Duvall.

“The strong return of double-crested cormorants is a significant conservation success. But in the absence of natural predators, cormorants are inflicting substantial depredation on both private and public aquatic resources. This effort by the Fish and Wildlife Service is necessary and appropriate to maintain a healthy ecosystem," said Former Director, U.S. Fish and Wildlife Service Dale Hall.

The Service seeks comments or suggestions from the public, governmental agencies, tribes, the scientific community, industry or any other interested parties. Areas for consideration include but are not limited to: potential reporting and monitoring strategies of cormorants by states and participating tribes; impacts on floodplains, wetlands, wild and scenic rivers or ecologically sensitive areas; impacts to other species of wildlife, including endangered or threatened species; and impacts on prime agricultural lands. Please see the Federal Register notice for more details.

The Fish and Wildlife Service will post all comments on http://www.regulations.gov, including any personal information you provide. The Service will hold public scoping meetings in the form of multiple webinars in February 2020.

More information about the rule-making process, cormorants and meetings, including how to register, will be posted online at https://www.fws.gov/birds/management/managed-speci.https://www.regulations.gov/document?D=FWS-HQ-MB-2...