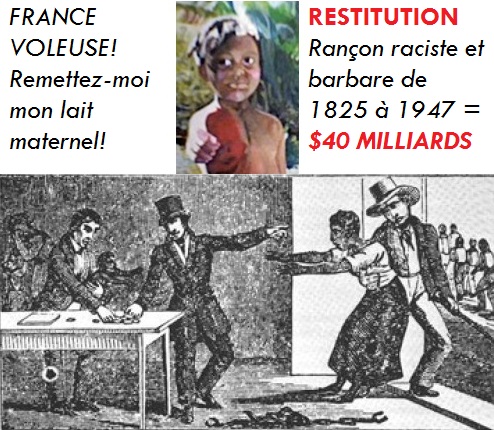 1276 people have signed this petition. Add your name now!

This petition calls for the full restitution by the State of France of funds it extorted from the Republic of Haiti at gun point starting in 1825. On April 7, 2003, the value of the infamous Charles X ransom was estimated at $22 billion by Haitian President Jean-Bertrand Aristide who demanded its restitution.

This demand is an initial measure of economic justice and respect for Haiti's territorial sovereignty and revolutionary legacy.

« The generals and chiefs of the army, in the name, of the people of Hayti signed a formal declaration of independence, and took a solemn oath to renounce France forever, pledging themselves to each other, to their posterity, and to the universe, to die rather than submit again to her dominion.»

Within the first weeks of 1804, Dessalines published a proclamation, offering to the captains of American vessels the sum of forty dollars for each individual native or black man of colour, whom they should convey back to Hayti.

Article XII. Children born from marriages between slaves shall be slaves, and if the husband and wife have different masters, they shall belong to the masters of the female slave, not to the master of her husband.

Art. 1. The people inhabiting the island formerly called St. Domingo, hereby agree to form themselves into a free state sovereign and independent of any other power in the universe, under the name of empire of Hayti.

In 1825, French ruler Charles X offered to recognize Haiti's independence on the condition that the new Black Republic pays 150 million gold francs in ransom. The extorted bounty was distributed to white slave holders for the loss of “property” they claim to have suffered as a result of the abolitionist Haitian Revolution.

This illegal and barbaric ransom was collected from 1825 to 1947. It was collected by violent means with an official ordinance of the French State which threatened to re-enslave the self-liberated Africans.

1853: French Admiral Duquesne threatens to bombard Port-au-Prince to restart payments on the French ransom which had been stopped in 1852 by Haitian Emperor Faustin Soulouque.

March 1877: French gun-boat aggression against Haiti. At issue: resumption of payments on the 1825 ransom - balance then re-estimated at 20 million gold Francs.

HOW AND TO WHOM DID FRANCE DISTRIBUTE THE RANSOMED FUNDS

See: Papers of William Conrad Schutte (1737-1806), a Haitian planter who emigrated to Portsmouth, Va., ca.1793, including Schutte's bills, accounts, deeds, miscellaneous legal papers, and correspondence in Haiti, 1769-1789; and papers, 1825-1832, of Schutte's widow, chiefly concerning her attempt to secure compensation from France for property losses in the Haitian revolt in the 1790s.

On April 7, 2003, the value of the infamous Charles X ransom was estimated at $22 Billion by Haitian President Jean-Bertrand Aristide who demanded its restitution.

March-May 2015: A delegation of Haitian children (descendants of abolitionist leader Jean-Jacques Dessalines) from all corners of the island await French President François Hollande as he prepares to set foot in Haiti, on May 12, 2015.

Their demand is clear and simple: TIME TO RETURN TO US OUR STOLEN BREAST MILK!

The Haitian Lawyers Leadership is a network dedicated to protecting the civil and cultural rights of Haitians at home and abroad. As of 1990, the Haitian masses have begun to release themselves from - two-century-old and Euro/U.S. imposed - cycles of debt, dependency and foreign domination. A pattern traditionally administered, first through Haiti's Rural Code devised to pay the 21.7 French debt, by the economic elite, on behalf of the imperial powers. The 21.7 demand is an initial measure of economic justice and respect for Haiti's territorial sovereignty and revolutionary legacy. The overwhelming U.S./France military force of 2004 intended to zombify the Black people of Haiti with fear or prevent the Haitian nation from releasing itself from containment-in-poverty shall not stop the Haitian struggle for economic justice and restitution. In 2004, France owed Haiti 21.7 billion (and counting at $34 per second). One day, the rule of law, will have enough teeth in this world. One day the world citizenry will have enough power and information and shall stand with the Haitian people to face empire. And then, no U.S. or French or any government will deny any peoples the rights to enjoy the benefit of their own labor and get away with it unscathed. Marguerite Laurent Haitian Lawyers Leadership Network

Committee for the Repayment of the Indemnity Money Extorted from Haiti (CRIME) - July 14, 2010

CRIME is a group of American, Canadian and French activists who have taken credit for a July 14 Yes Men-style hoax announcement that Paris would pay $21 billion of restitution to Haiti for money extorted from the former French colony following Haitian independence.

Text and Video link of the plea made on CTV (National Television) to the Governor General of Canada, Michaelle Jean, native of Haiti and former citizen of France.

A network of lawyers, scholars, journalists, concerned individuals and grassroots organizations and activists, dedicated to institutionalizing the rule of law and protecting the civil and cultural rights of Haitians at home and abroad.