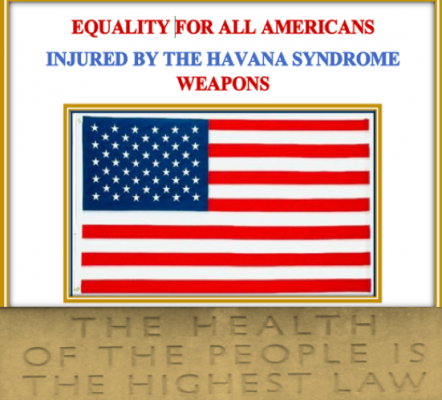 471 people have signed this petition. Add your name now!

This is a petition to support the above noted, needed, and equitable legislation, designed to invoke fairness, in the Havana Syndrome Act of 2021. The goal is to help all Americans injured by neurological attacks, and not some, as defined in the Havana Act.

Precisely, we seek the extension of this Bill to include Americans and their families, who have been injured by the Havana Syndrome weapons, to receive payments for brain and bodily injuries that were incurred (1) during a period of time in the United States and (2) in connection with war, insurgency, hostile acts, terrorist activity, or other agency-designated incidents.

We stand with the current Havana Act’s authority that applies to injuries incurred before, on, or after the date of the bill's enactment and the requirements that agencies must submit classified reports on the bill's implementation, including the number of payments made and the amount of each payment.

Since 2011, as documented in the USA Presidential Bioethics Commission, noted below, many Americans have reported experiencing unusual and severe cognitive and neurological impairments while living in the United States, the source of which is currently aligned to the Havana Syndrome weapons and such is under investigation. Symptoms are currently reported by many Americans and personnel stationed in Cuba and have since been collectively referred to as Havana Syndrome.

There is a need for equality in the inclusion of all Americans injured by the Havana Syndrome weapons, in the application and enforcement of the Havana Syndrome Act. The Havana Syndrome Equality Act, defined as invoked equality, can be achieved administratively and or through supplemental legislation. Equality and fairness in the current, already passed Havana Act, is greatly needed on behalf of the public safety of ALL Havana Syndrome injured parties and with respect to impartiality.

Please note, if you donate on this petition website, the funds go to the I-Petition company only. If you want to donate directly to the Havana Syndrome Equality Act cause, please go to DONATE NOW and or contact hvsequality777@gmail.com

Finally, we seek equal protection of the law in the inclusion and enforcement of the Havana Syndrome Act, by any lawful means necessary, including the filing of the proposed Havana Syndrome Equality Act accordingly. Thank you for your time.

Helping American Victims Afflicted by Neurological Attacks Act of 2021 or the HAVANA Act of 2021: https://www.congress.gov/bill/117th-congress/senate-bill/1828

The Safety of the People Is the Supreme Maxim of Law, pages 9 and 10 at: https://giftoftruth.files.wordpress.com/2017/06/maxims-of-common-law-jurisdictionary.pdf

Report: Microwave weapons may be behind mysterious illness afflicting US officials abroad: https://www.vox.com/2020/12/6/22156988/havana-syndrome-micowave-weapons-report