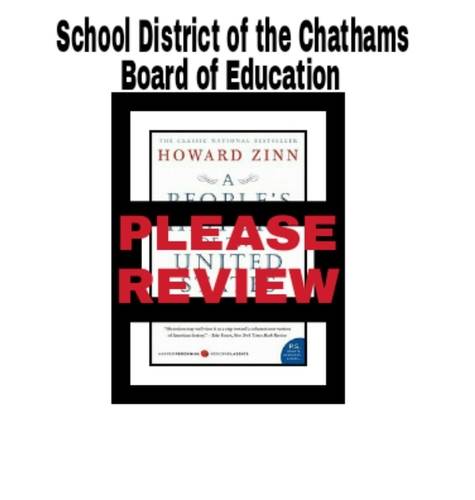 Request BOE To Review A People’s History of the United States by H. Zinn

Dear Dr. LaSusa and members of the BOE for The School District of the Chatham's,

We are following up on Libby Hilsenrath’s formal objection to the continued inclusion of Howard Zinn’s book, A People’s History of the United States, in the School District of the Chatham’s. We are adding our voices to the growing choir as we too, would like this book to go through a formal review. “Objectivity is impossible and it is also undesirable,” writes Zinn on page 646 of this book. We believe a writer who openly admits he lacks objectivity shouldn’t be the bearer of historical fact. We are not asking for this publication to be removed from the school library. Additionally, we see the value of this book when used in a class with other books to provide balance and perspective. This book, however, should never be used under the guise of true American history.

Many educators share our view of Howard Zinn and this particular book:

Princeton University’s Sean Wilentz said that Zinn’s interpretation of America’s past amounts to little more than taking “all of the guys in white hats and put them in black hats, and vice versa.”

Stanford University’s Sam Wineburg, one of the world's top researchers in the field of history education says, ” Zinn's desire to cast a light on what he saw as historic injustice was a crusade built on secondary sources of questionable provenance, omission of exculpatory evidence, leading questions and shaky connections between evidence and conclusions.”

Harvard University professor Oscar Handlin denounced "the deranged quality of his fairy tale, in which the incidents are made to fit the legend, no matter how intractable the evidence of American history."

Michael Kazin, a socialist historian, of Georgetown University writes, “For all his virtuous intentions Zinn essentially reduced the past to a Manichean fable.” It should be noted, Kazin writes and speaks often about how he agrees with much of Zinn’s politics but is opposed to his clearly slanted view of history.

Indiana’s former governor, Mitch Daniels, now president of Purdue University, urged the state to rid itself of Zinn’s book and asked that the young people of Indiana not be “force fed a totally false version of our history.”

In Zinn’s book he described the United States entry in World War II as being manufactured through the institutions of American society. Zinn only looks to explain the view of Christopher Columbus discovering America from the viewpoint of the Native American’s. History, to be truthful, should include both sides. To Zinn, the Great Depression of the 1930s is a demonstration that “the capitalist system was by its nature unsound: a system driven by the one overriding motive of corporate profit and therefore unstable, unpredictable and blind to human needs.”

Zinn describes our founding as follows: “Around 1776, certain important people in the English colonies made a discovery that would prove enormously useful for the next two hundred years. They found that by creating a nation, a symbol, a legal unity called the United States, they could take over land, profits, and political power from favorites of the British Empire. In the process, they could hold back a number of potential rebellions and create a consensus of popular support for the fule of a new, privileged leadership.”

And he continues, “For instance, there is the issue of class. It is pretended that, as in the Preamble to the Constitution, is it ‘we the people’ who wrote that document, rather than 50 privileged white males whose class interest required a strong central government.”

This constant narrative only from the oppressed viewpoint creates a bizarrely slanted picture of America, it’s people and it’s history.

Many more have not only shared this view of A People’s History but reported on it:

Gabriel Schoenfeld of the New York Daily News wrote in 2013 of Howard Zinn, “he was a mythmaker who was at constant pains to portray the American story as one long chronicle of exploitation, oppression and deceit.”

The History News Network in a 2012 poll amongst it’s readership, voted Howard Zinn’s book, A People’s History of the United States, the second most historically inaccurate book in print with 641 votes. The number one book had only a few votes more at 650.

Eric Foner wrote in his 1980 New York Times review of A People's History, "The book bears the same relation to traditional texts as a photographic negative does to a print: the areas of darkness and light have been reversed." Eric Foner continued in his review, "At issue here is not simply a question of 'balance' or of comprehensive coverage; every work of history is selective. What is needed, however, is an integrated account incorporating both Thomas Jefferson and his slaves, Andrew Jackson and the Indians...in a continuing historical process, in which each group's experience is shaped in large measure by its relation to others."

“Objectivity is impossible and it is also undesirable. That is, if it were possible it would be undesirable, because if you have any kind of a social aim, if you think history should serve society in some way; should serve the progress of the human race; should serve justice in some way, then it requires that you make your selection on the basis of what you think will advance causes of humanity.” Zinn, A People's History of the United States, p. 646

If a class were being taught on a Marxist’s view of America or a comparison study of various history books then this book would be a great addition. This book, however, should never be used as a standalone supplementary text. We feel confident that if a committee comprised of Board of Education members, instructional staff, administrators, and parents truly took an unbiased review of this book they would alter it's inclusion in the curriculum.

Links for additional research and reading: