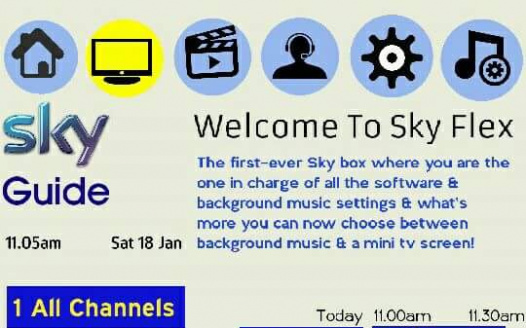 For many years up until Sky UK removed the epg (On-screen Electronic Programme Guide) BACKGROUND music in 2018, I had a long lasting fascination with it which used to play on the older standard Sky & Sky+ boxes which I still have in my bedroom.

Unfortunately on the 1st of January of 2018 after almost twenty years, the epg music finally ended for good & that was a resounding disappointment to me because whenever my standard Sky box breaks down beyond repair then it will be replaced with a newer box which also no longer comes with the epg music & in that case it is confirmed that I have lost the epg music for good & even worse, gone are the days when December the 1st arrives & we are treated to a full month of CHRISTMAS background music tracks instead of the REGULAR music that is played on it & my former requests for more frequent changes of epg music throughout the year & for http://www.satvmusic.com to get their team of experienced music producers & musicians to create more & more 100% all-new CHRISTMAS music so that Sky's music department would never run out of NEW Christmas music to play on their epg each December due to a LACK of new Christmas music being available at http://www.satvmusic.com which is Sky UK's preferred music production library, from now on, whilst there are plenty of OTHER music categories available, is now forever POINTLESS unless Sky UK consider THIS new idea of mine, but development wouldn't exactly be EASY.

Since late on in 2018 I have finally ACCEPTED the fact that the Sky epg music has gone for good after twenty years!

The idea is for a brand new Sky box called Sky Flex which consists of extra flexibility & a lot more than ever before putting the VIEWERS in control of their own BOX!

The new ideal Sky Flex box would put viewers in charge of their own epg software at any time they liked.

It would work very much like a computer & would allow changes such as background colour, text size & font settings.

Another exciting new feature would be great news to those who miss the good old days of the background music on the epg as it would allow access to http://www.satvmusic.com for all customers to create a customised playlist file of music tracks to have as their own personalised set of epg music as well as having the option of resetting to the default background music & it would also be possible to set a timed schedule for when the music changes & to which tracks.

With the touch of a button, viewers would at last have the choice between background music & a mini tv screen which would also be a fair deal that works in the interests of all Sky customers.

As a result, Sky Flex would also come with a distinctive new remote control with some new buttons.

All I want is a deal that works for EVERYONE as WELL as myself AND others.

So Sky, DO we finally have ourselves a DEAL that will work in Everyone's best interests?