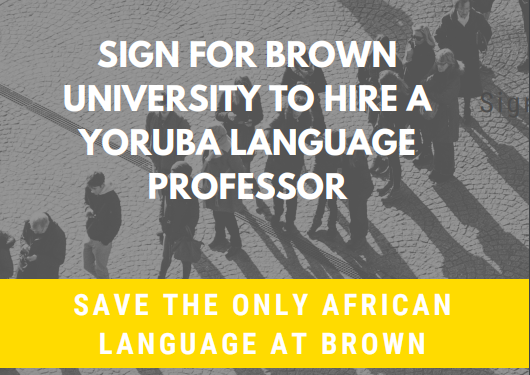 This petition is for the Provost's Office of Brown University to create a faculty line in either the Center for Language Studies (CLS) or the Africana Studies Department for a permanent Yoruba language professor. The two-year-old Yoruba Language course is currently the only African language offered at Brown, meaning that if Brown is unwilling to hire a professor for the Yoruba language program, the university will regress back to having no African languages offered at Brown.

Since September of 2017 Brown University has offered a Yoruba language course through a shared course initiative with Cornell University which was taught by a remote instructor. This course was the only African language offered during this time at Brown and was the result of student organizing from proposals to professor searches. In the following two years, student organizers worked with the university to move past the temporary shared course initiative and towards hiring a permanent Yoruba language professor at the University. In May of 2019 organizers were notified that the shared course initiative would not be offered and the Yoruba course would no longer be offered even though the course reached maximum enrollment and students expressing additional interest in pre-registration alone.

Within an institution that so publicly values diversity and inclusion, we find the lack of commitment and funding to African languages at Brown disheartening. Students should not have to convince an institution as globally minded and "inclusive" as Brown University of the need for African languages, especially when languages as diverse and esoteric as Sanskrit and Hieroglyphics are already offered. The university should be eager to join peer institutions such as Harvard University and Boston University in offering robust African Language programs, particularly with the inter-disciplinary focus and global scope intended in the Watson Institute's new International and Public Affairs concentration.

We hope that getting a permanent on-site professor for the existing Yoruba course will be a pivotal step towards building an African language program and pushing Brown closer to its vision of being a globally-minded institution that fosters diversity and inclusion. Please sign to join us in this call for action!