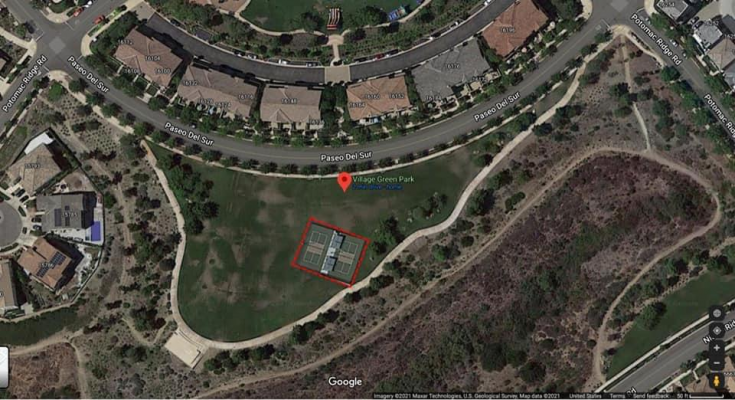 The developer, Lennar, is offering to build two pickleball courts with some seating and shade structues as a FREE gift to our community as a thank you for working together for several decades. Pickleball is fun for all ages and is quickly becoming the hot sport for seniors as it involves less running and less knee and elbow stress than tennis. Community amenities such as this are a big part of what makes living here so great and why Del Sur is so desirable to new buyers.

The pickleball courts take up only a very small portion of The Village Green (a pickle ball court is only about 1/4 the size of a tennis court, please see the diagram provided by the HOA for size and placement, if the diagram isn't showing properly on your mobile device click here for a better view). The two courts would not be near the street or the stage. The design and location of the courts have been already approved by the Del Sur CSC. The courts work really well for Fall Fest, Snow Day, movies in the park, etc. In fact, the CSC loves the idea because it creates a natural fenced in area that will become the adult-only beer and wine garden for all events. The CSC has, in fact, re-designed the fall festival layout to work with this new amenity.

The HOA did a full sound study and the levels of noise that would be produced from the courts at the closest homes were less than two people having a normal conversation with each other. There are a lot of people in the community that are really excited to have these pickleball courts come soon. Most pickleball courts require joining a separate club and paying use fees. The only other pickleball courts in Del Sur are in Auberge and are completely private for their own HOA and could never be opened up to the rest of Del Sur.

There are some people fighting against having this new amenity at The Village Green. It was originally planned to be built at Aubrey Park, but nearby residents fought against that because they worried about the noise to nearby homes and did not want to give up any of the green space there. So, the developer agreed to move the plan to a larger park further away from any homes, yet still some people are fighting against it despite that the current plan has been well thought out and a noise study was conducted. Those who are fighting it are making themselves heard, so those in support of it must speak up or the current plan might get defeated, and if it gets defeated I don’t think we will be gifted this free amenity at all.

Please help to show support for free pickleball courts for our community by doing as many as possible of the following ASAP: