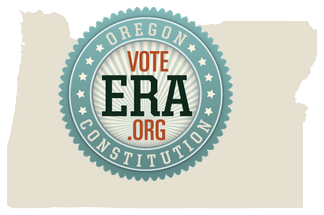 CONSTITUTIONAL EQUALITY FOR OREGON WOMEN IS LONG OVERDUE.
Ballot Measure 89 would add the Equal Rights Amendment to the Oregon State Constitution:
“Equality of rights under the law shall not be denied or abridged by the State of Oregon or by any political subdivision in this state on account of sex.”
Equality should not be subject to political whims or trends. Measure 89 explicitly bans sex discrimination in the constitution. Women who are fighting employment, wage, benefit, or educational discrimination or seeking protection against violence should have the full weight of the Oregon constitution behind them!
Sign the digital form now to pledge your YES vote for Measure 89 and indicate in the comment box if you'd like to become a volunteer.
WHY WE NEED THE EQUAL RIGHTS AMENDMENT
Nothing in the State Constitution prohibits sex discrimination. Any protections against sex discrimination are a result of laws and court decisions. But, laws can change or even be repealed and court decisions can be overturned. Measure 89 will give Oregon women constitutional equality that cannot be repealed by the state legislature and explicitly tells the Oregon courts that sex discrimination is banned. 20 states already have an equal rights provision in their constitutions. It’s time for Oregon to explicitly ban sex discrimination.
That’s why so many Oregon leaders and organizations support voting YES on Measure 89, including former Oregon Supreme Court Justices Muniz, Gillette, Riggs, and Van Hoomissen, the YWCA, Boys and Girls Club of Southern Oregon, NAACP Eugene and Springfield, Oregon Education Association, Oregon Business Association, AFSCME, SEIU, League of Women Voters, the American Association for University Women, and Oregon NOW.