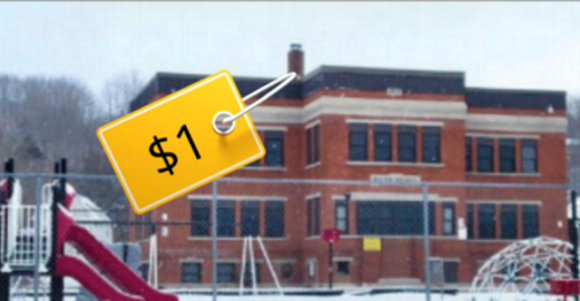 I am writing on behalf of a group of concerned citizens, who were disappointed by the proposed deal that has been struck with New England Family Housing (TKB Properties) for the purchase of the beautiful Brown School for just $1. We, the taxpayers, have put hundreds of thousands of dollars into that building and would love to see some return on the investment. For any deal to be made to sell that building for just $1 is a slap in the face to all Berlin taxpayers.

You can not in good conscience sell this beautiful building for just $1.00 then turn around and once again increase our tax rate. Either we need this money enough to increase the tax burden on your residents, who are already paying the 4th highest tax rate in the state, or you have enough money to be able to give away a building. Which is it? You can’t claim that we have no money to fix our streets then take a building like that and give it away. That is not fiscally responsible.

The current proposal that is on the table is for New England Family Housing to remodel the Brown School. They would be seeking a $500,000 CDB block grant from the federal government. As we all know, nothing from the federal government is free, it always comes at a high price and with strings attached. This particular grant is offered specifically for those low to moderate-income applicants. This grant may come at a price that we should not be willing to pay right now. The CDB Block Grant is a grant that not only requires a majority (51%) of units to be designated to low to moderate-income housing but also has no citizenship requirements making it eligible for illegals and refugees.

Due to the fact that this building was only sent out as a Request for Proposals… contrary to what is being said by the current administration! Last fall it was, in fact, not put out for bid but sent out as a “REQUEST FOR PROPOSAL.” A Request for Proposals is very different from a “Bid” and you will get a difference in who will respond. We respectfully ask that this building be put back out to bid and generously advertised throughout New England. We also ask that this be a very transparent process.