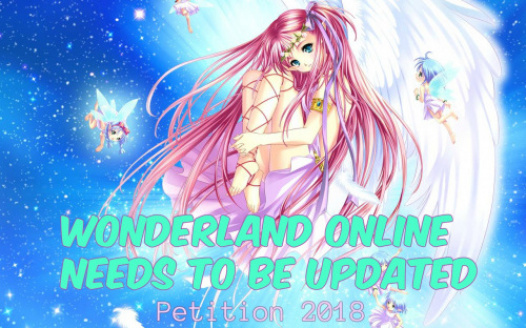 Wonderland Online Needs to be UPDATED

" Wonderland Online (WLO - http://wl.igg.com/ ) is a 2D adventure MMORPG based on several ancient South American and pacific Island cultures, the mysterious Mayans, the huge stone statues of Easter Island and much more combine to form unique quests filled with fascinating elements that our players will experience throughout the game."

Duping has been an issue when players found an exploit in the server code which started back in 2014 in Taurus server, which spread to other servers. Particularly Aries server back in early 2016 where most of the remaining players, specifically the mall buyers has been based when the population from the other servers declined(was fixed in 6/2017). Facilitating a merge of all clusters into the first three, namely: Aries, Taurus, and Cancer. In the end, due to lack of updates and the license to operate contract expiring, IGG decided not to renew the contract, ending services in 1/26/2018, mall closing on 12/26/2017.

IGG renewed the contract and WLO will be operating as normal.

Due to the lack of updates, players have started to lose interest in the game, causing a drastical decrease of game activity and mall purchases.

We need a safe game with a solid security system, which no third parties can access, so duping (or any possible issue) will not happen again.

We are requesting a game from which everybody has something to win. Employers with a stable job, people who are enjoying to play this game and play for it and a game master who supervise everything.

If there are no available funds, we advise IGG to start a donating poll.

WE NEED THIS UPDATE SO LET'S FIGHT FOR IT.

IGG, ARE YOU WILLING TO HELP US?