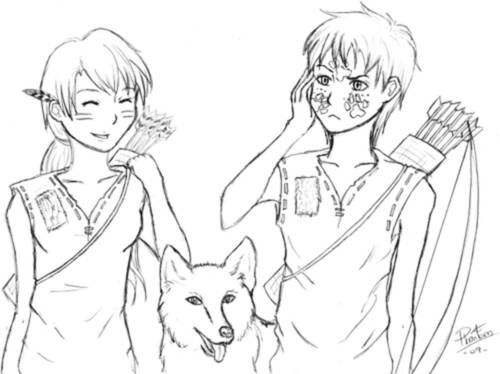 THANK YOU, PACK BROTHERS! (yes I had to sneak in a pun, sorry) x

Many of us have for a long time been waiting for someone out there to bring the beloved, well-written series Chronicles of Ancient Darkness - also called "Wolf Brother" - to the screen, written by no other than Michelle Paver.

There have been different news, rumours and a lot of speculation on the fans' behalf, especially since there have been various updates about the progress of filming but not much of it confirmed. In 2007 Fox apparently bought the rights and a script had been written. But because of circumstances we don't know of, the production was delayed and in 2010 it was stated that the project is pending or hasn't been picked up.

This is very unfortunate to many fans who still want there to be an adaptation, for reasons such as that we can see it becoming a majorly popular cinematic series and that it is a story worth being adapted into other forms of media so that newer generations can be introduced to it as well. But mainly, we'd simply love to see our favourite childhood books come alive on the big screen. To be reminded of how these books got people of all ages, most prominently children, to love storytelling and reading but also to appreciate our imagination and the culture and history of the prehistoric age, such as myself.

Therefore I, and hopefully a lot of others, want to urge you to take a look at this petition and pick up the project, or at the very least give us more information and/or an update on the situation around the adaptation process. I hope you'll find it worth the time to do so, when so many people are still invested in Wolf Brother and newer generations of children everyday start out on the amazing journey of Torak and his wolf.