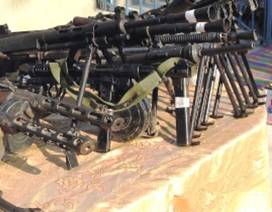 The exchange of illegal arms for money, power, and terrorizing civilians has been a problem for many years. The people who are making these exchanges care not if the weapons are illegal, who they are selling them to, nor what they are being used for. They only care that they make money. What is the outcome of these people’s greediness, you may ask. The answer to that would be that 1,500 people are killed each day by illegal weapons. By resolving the illegal arms trading issue, the world would be better because it would allow more control and safety. It would also reduce the amount of deaths that occur every day. There would be more control over the people because there wouldn’t be so much trouble with people doing bad things. For example, it would reduce deaths, drug dealing, and violence. Hundreds of lives would be saved every year. With that being said, we petition to have stricter punishments enforced for breaking this law, and to have increased military or police involvement on this topic. We must not keep going after the runners, but we must try and arrest the sources of these issues. So let's make the world a better place, thank you.