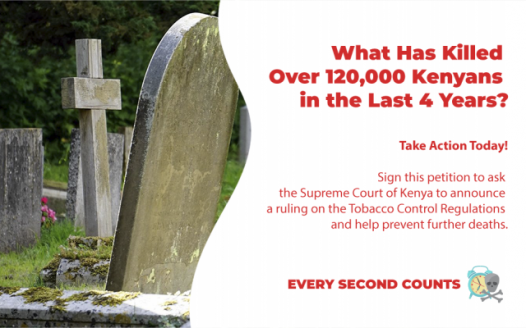 The Tobacco Control Regulations were officially published in December 2014 following an Act of Parliament. The new regulations which were passed to safeguard the health interests of Kenya were set to become operational within six months, in June 2015.

But for four years now, two of the big tobacco manufacturers have been playing a game of musical chairs with these crucial regulations, halting and delaying its effect by bringing curiously timed legal challenges at different levels of court, even when rulings went against their favour at each turn. First it was the High Court, then the Court of Appeal and now, the Supreme Court- where the challenge has been grounded since 2017.

According to the World Health Organization, over 30,000 Kenyans die of tobacco-related causes every year[1], many of which are related to cancer. This consequently puts a strain on public health resources, which would otherwise be focused on fighting other unavoidable diseases.

It is painful to think of the lives that would have been saved by the 2014 Tobacco Control Regulations, had it have been effectively operational, as intended. In the last 4 years since the regulations went to court, it is estimated that more than 120,000 Kenyans have died from tobacco use. The fact that thousands of Kenyan families and the public suffer unnecessary pain and financial strain of tobacco-related cancers is BARBARIC, HEARTBREAKING AND UNACCEPTABLE.

We agree that the time has come for the Supreme Court to announce a ruling on the 2014 Tobacco Control Regulations challenge, to enable effective implementation of the regulations in order to avert unnecessary suffering and deaths of thousands of Kenyans.