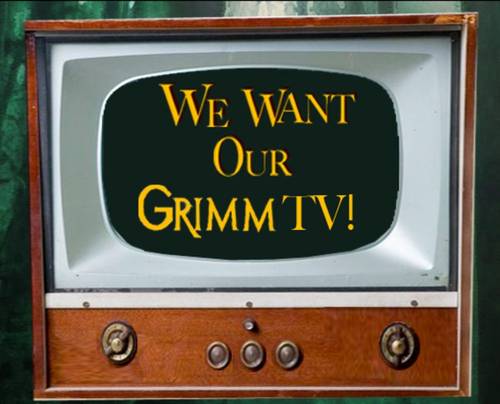 We Want Our Grimm TV!

Grimmsters, it's time for us to show our love and SAVE Friday night's best-ever hour of television! We want our Grimm TV, and when we say we want it, we mean we want it ALL!

NBC thinks that since they said the word "renewed" we'll not notice that they also cut TEN episodes from the upcoming season!

Of course, we're super stoked Grimm is returning, but, shortened seasons are one of the sneaky ways networks quietly kill beloved veteran series like Grimm and by the time fans realize what the network is up to it's way too late to stop it!

We not only want a full season, but many more seasons, and the only way that can happen is if we make the network hear us!

NOW is the time to let them know just how passionate the Grimm fan community is! Let's show just how many of us care, and that we will settle for nothing less than a FULL season 6 of our beloved Scooby-Gang's wesen-y Portland Adventures.

We've set the signature goal at 100,000, but we know Grimm, which has a world-wide following, has so many more viewers than that, and the reality is we'll need many more to make an impact on the network!

So let's get going: Sign the petition and network it like crazy! Together we CAN get enough to send it on to NBC!