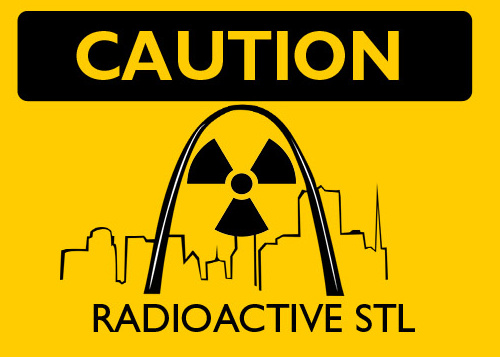 "Anything else you're interested in is not going to happen if you can't breathe the air and drink the water. Don't sit this one out. Do something." (Carl Sagan)

As part of St. Louis, MO's community, Amy Coleman and Nina Migneco present to you St. Louis's most current and under publicized environmental and social issue. Not only does this effect the current residents of STL, this issue effects future generations to come. Less than 30 minutes from the Gateway Arch, one of the nation's largest nuclear weapons waste site sits in Bridgeton, MO. This landfill contains illegal radioactive waste from the Manhattan Project from WWII dumped in 1973. Not only is this landfill 15 football fields large, 1/3 (5 1/2 football fields) of the site is being consumed by a smoldering subsurface fire. This fire has been burning for over 2 years and has the potential to burn for up to 10 years as it spreads. The fire has not yet reached the radioactive waste, but that is a huge concern for the future of the landfill. There are many lead authority figures that have understated the danger of this Superfund Site and mismanaged the issues that have arised in the past years. Superfund is a "United States federal law designed to clean up sites contaminated with hazardous substances as well as broadly define 'pollutants or contaminants'". This is a prevalent issue to not only the people of Bridgeton, but all the people of St. Louis. This landfill has contaminated water supplies and impacted the water quality in the Missouri River/ Flood Plain with waste from the leachate plant. The leachate plant at the landfill pumps out 1.5 million gallons of leachate a week from the waste. The air quality around the area has decreased because of emissions such as, carbon monoxide, volatile organic compounds, aldehydes, hydrogen sulfide, sulfur dioxide and benzene (carcinogen), and methane have been released from the site. This poses a huge problem because the smelly fumes coming into the air. St. Louis City, County and St. Charles just got a "F" for ozone layer depletion and air quality by the American Lung Association (4/29/15). It has been affecting resident's health with results starting to show these effects. The cancer rates have increased by an overwhelming statistic of 302%. Many residents have various types of cancer, kids with birth defects, asthma, tumors and/or other serious health issues that are caused by radioactive waste. This petition is to prove that Bridgeton does not have a problem, Saint Louis has a problem. This is bigger than one area of North County, this has the potential to be a nation wide problem. The least Saint Louis residents can do is be knowledgeable and show their support for this cause. If this is presented to greater authority and political figures from a united Saint Louis community, the action that needs to be taken will be kickstarted. If you feel so inclined, please sign this petition to help us show our concern and awareness of the problem in Bridgeton!

Thank you for your time and concern,