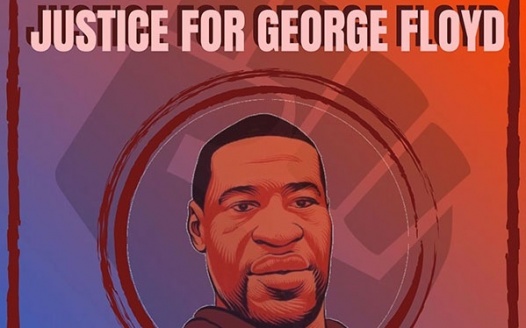 WE WONT STOP TILL GEORGE FLOYD GETS JUSTICE

I’m pretty sure we’re all familiar with George Floyd, if not here’s a summary of who he is. On May 25, 2020, George Floyd, an African-American man, died in Powderhorn, a neighborhood south of downtown Minneapolis, Minnesota. While Floyd was handcuffed and lying face down on a city street during an arrest, Derek Chauvin, a white Minneapolis police officer, kept his knee on the right side of Floyd's neck for 8 minutes and 46 seconds; according to the criminal complaint against Chauvin, 2 minutes and 53 seconds of that time occurred after Floyd became unresponsive. After his pass the officer responsible was not charged with murder he was just dismissed. That’s when minorities in Minneapolis decided enough was enough they began protesting, rioting, looting and destroying police departments and went as far as burning one down. After this vicious protest it took four days for the officer [Derek Chauvin] to get charged with involuntary manslaughter. But that would mean, the crime of killing another human being unlawfully but unintentionally. George Floyd screamed multiple times “I can’t breathe” “I’m going to die” “THEY’RE GOING TO KILL ME , MAMA.” What I’m trying to say is that Derek Chauvin and the 3 other officers should be charged with second degree murder. As it says second degree murder is, killing another with malice - doing a harmful act without just cause or legal excuse - but without premeditation or deliberation. In other words, this means intentionally killing someone without planning to do so in advance. Please Sign and share if you want to contact me my email is jminani181@gmail.com