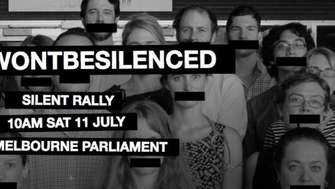 We Won't Be Silenced

From July 1, 2015 the Border Force Act can silence health workers, teachers, and other professionals from reporting human rights violations against asylum seekers in detention camps on Nauru and Manus Island. Despite our professional and ethical mandate to report abuse and neglect, particularly of children, doing so is now punishable by up to two years in prison.

The National Inquiry into Children in Immigration Detention and the current investigation by the Royal Commission into child sex abuse have unveiled the horrific conditions asylum seekers are forced to live in. The Border Force Act only further thickens the cloud of secrecy around what goes in immigration detention. Australia has the right to know. No government department should be immune to public scrutiny.

To the Minister of Immigration and Border Protection, Peter Dutton, and Prime Minister Tony Abbott, we implore you to reverse this Act. Until then, #WeWillNotBeSilenced.