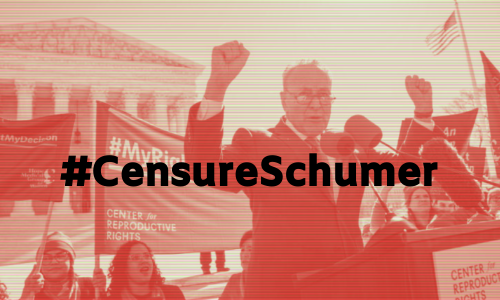 We Will Not Be Threatened: #CensureSchumer

Texans For Life 0 Comments
25 people have signed. Add your voice!
3%

Recently, the US Supreme Court heard arguments for the June Medical Services v. Russo case regarding the safety of women that undergo a dangerous abortion procedure. This case centers around a state statute requiring doctors performing abortions to have admitting privileges at a hospital within 30 miles of the abortion facility.

During a rally hosted by the Center for Reproductive Rights, Democrat Sen. Chuck Schumer stated, "I want to tell you, Gorsuch. I want to tell you, Kavanaugh. You have released the whirlwind and you will pay the price!" Schumer warned. "You won’t know what hit you if you go forward with these awful decisions."

We agree with Chief Justice John Roberts’ rare and powerful statement in response: "Justices know that criticism comes with the territory, but threatening statements of this sort from the highest levels of government are not only inappropriate, they are dangerous. All Members of the Court will continue to do their job, without fear or favor, from whatever quarter."

Following, President Trump gave a strong and clear mandate, and we couldn’t agree more! “He must pay a severe price for this!”

"There can be few things worse in a civilized, law abiding nation, than a United States Senator openly, and for all to see and hear, threatening the Supreme Court or its Justices. This is what Chuck Schumer just did,” Trump concluded in a tweet.

We not only echo the rare statement from Chief Justice Roberts and the strong mandate from President Trump regarding Democrat Sen. Chuck Schumer's dangerous and irresponsible threats to the Supreme Court. We demand swift action! I affix my signature to this petition to urge our Texas Senators John Cornyn and Ted Cruz to call on the US Senate to censure Sen. Chuck Schumer! #CensureSchumer