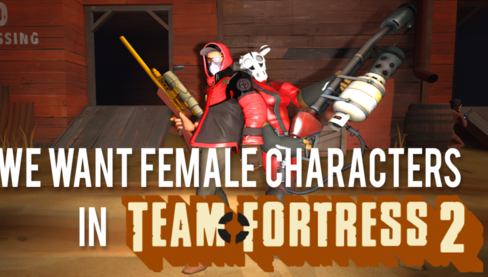 Recently many of the Team Fortress 2 updates that have came out and started to draw Team Fortress 2 from the uniqueness that it once had, going from default playing with your team for $60 to free playing with skins that ideally came from CS:GO. Many of the Team Fortress 2 veterans had watched the game grow and die, we watched when it became free, the change in the players, and the community. After much thought of a new update, I have one that will bring the uniqueness of Team Fortress 2 back to what it originally was. I want to see female characters in the game. Now understand this there have already been model designed for both Team Fortress 2 as mods and models designed for SFM that are all created on One Singular purpose. Female characters in the game. Now many of these are created by developers who characters have done it for completely free just to see the community who want to be feminine in Team Fortress 2 play as their desired gender even if it is just client-side. However I want to see this become a new update for Team Fortress this update will bring back a lot of the silliness and different that Team Fortress 2 had compared to every other game out there.