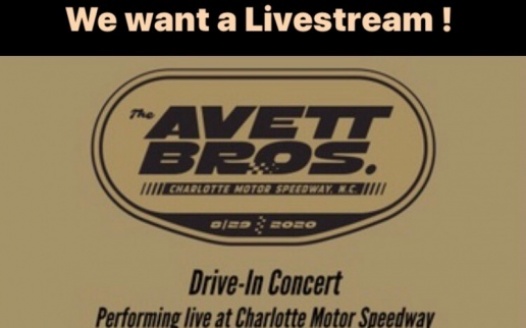 766 people have signed this petition. Add your name now!

On August 29th, The Avett Brothers - Scott, Seth, Bob, and Joe - will be performing live in-person at the Speedway. The show will also be broadcast on the Speedway's 16,000 square-foot television screen, one of the largest screens in the world.
It’s been nearly six months since the band performed live together in front of their fans, and we miss them! This petition simply asks that the band expand their audience and livestream the show so fans across the nation, and perhaps even worldwide, can watch it from home safely.

It is neither safe nor reasonable for many to travel to North Carolina due to the pandemic, but we would love nothing more than to support the band and watch this show at home.
Fans who sign this petition are signing to document their interest in paying to watch the stream for a suggested price of $20 for the show, and perhaps buy some special merch to commemorate the event, as well. Thank you for considering this request.

Fans, please leave additional suggestions and the amount of money you’d be willing to pay in the comments.