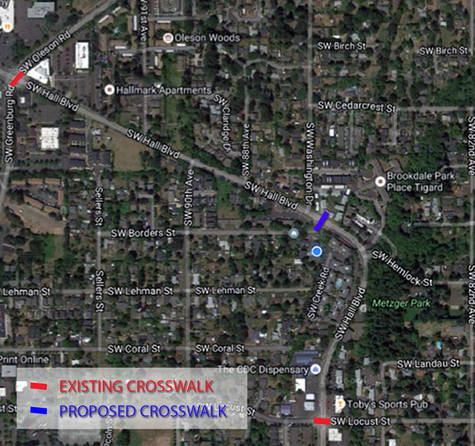 Every day, a LOT of people cross Hall Blvd near Metzger Park unsafely due to inadequate numbers of pedestrian crosswalks between Greenburg and Locust.

Facts About this Stretch of Street:

ODOT says there has been no pedestrian crashes in the area recorded in the last five years. But how many close calls have there been?

The rule is that there must be at least 20 pedestrians crossing during a peak hour to warrant further investigation into a crosswalk or a Rectangular Rapid Flash Beacon (RRFB) crossing.

This is a petition to encourage ODOT to conduct a traffic engineering study between Washington and Hemlock and see how many pedestrians cross each day during peak traffic hours.