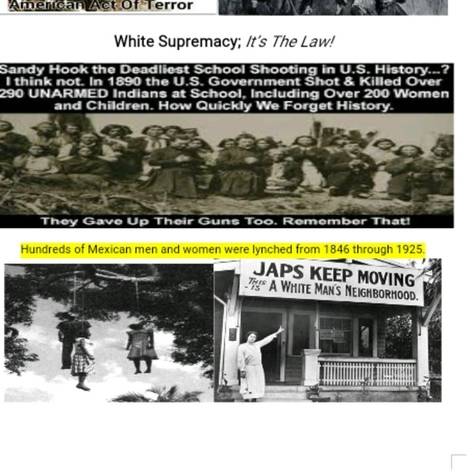 WE THE PEOPLE OF COLOR, PETITIONERS VS. THE UNITED STATES OF AMERICA charge the UNITED STATES with Crimes Against Humanity before the World Court

We charge the UNITED STATES with human rights abuses against black and brown people, false imprisonment, capital punishment, privacy violations, racism, mass surveillance, imprisonment of the poor, homeless, and juveniles, solitary confinement, imprisonment of nonviolent offenders, unjust stop and frisk laws, and the violent acts of murder by police officers on unarmed black people which has created a clear and present danger to the nation as a whole.

We bring the UNITED STATES government before the United Nations and the World Court for its complicity in the existence of a genocidal plan for destruction of black Americans based on the United Nations own definition of genocide; any acts committed with the intent to destroy, in whole or in part, a national, ethnical, racial or religious group, as such: killing members of the group; causing serious bodily or mental harm to members of a group; deliberately inflicting on the group conditions of life calculated to bring about its physical destruction in whole or in part; imposing measures intended to prevent births within the group; and forcibly transferring children of the group to another group.

Black people endure legal discrimination, disenfranchisement, inequalities in health care, and violent incidents of police brutality. The United States government is both complicit with and responsible for this genocidal situation. Black people in America have suffered from genocide as the result of the consistent, conscious, unified policies of every branch of American government. The government has endorsed racism, monopoly capitalism, and violent white supremacy is at the core of American culture. We have appealed to the conscious of America, time and time again, marching and protesting until we can march and protest no more, but America's material greed, hate, fear, and racism only allows violence against blacks to continue.

It is impossible for the government that created white supremacy, white privilege, and racism to solve the problems it created. Therefore, it must be taken out of American courts, and taken before the World in World Court. The Nuremberg trials set a precedent by establishing a permanent International Court for prosecuting crimes against humanity. These trials were held in Nuremberg Germany for the purpose of bringing Nazi war criminals to justice from 1945 to 1949. The Jewish Holocaust, Apartheid, The Gaza War, The Democratic People's Republic of Korea, Rwanda, and Sierra Leone all have been prosecuted for crimes against humanity, torture, rape, forced prostitution, pregnancy sterilization, sexual violence, kidnapping, murder, extermination, enslavement, deportation or forcible transfer of a entire population, imprisonment and deprivation of civil liberties.

America has committed all these unspeakable crimes and atrocities, but is never mentioned in this list of Nations having committed these crimes against humanity. Most of White America ignores or never really hears the painful groans or the justifiable cries of anger that come from black Americans. The World is on the side of people of color, other countries are not blind to the injustices of America, they are watching, and they see what America is doing to black people. As recently as 2014 the UNITED Nations Committee for the Elimination of Racial Discrimination condemned the UNITED STATES for racial disparity and police brutality, Racial profiling, infrastructure discrimination, gerrymandering, and for the legal system being used to harm black and brown people.

The world is on our side! The world knows that Iraq had no weapons of mass destruction and that terrorism or Saddam Hussein killing his own people was just a justification for America to go to war, kill Saddam Hussein, and take control of Iraqi oil. The UNITED STATES has a long history of human rights abuses, extremely cruel acts of violence, abuse, barbarity, savagery, wickedness, inhumanity, evil and brutality towards other human beings. America has committed unspeakable acts across the world. Trying to police the world without any authority.

The Declaration of Independence

"When in the course of human events it becomes necessary for one people to dissolve the political bands which have connected them with another and to assume among the powers of the earth, the separate and equal station to which the Laws of Nature and Nature's God entitle them, a decent respect of the opinions of mankind requires that they should declare the causes which compel them to the separation."

This first paragraph of The Declaration of Independence speaks directly to black people in America today. As it states that when any group of people have to separate themselves from a government because of the way they've been treated and assume their God given "human rights" that this group of people respectfully decree the reasons they are forced to separate;

(2nd paragraph of The Declaration of Independence)

"We hold these truths to be self-evident, that all men are created equal, that they are endowed by their creator with certain inalienable rights, that among these are life, liberty, and the pursuit of happiness. That, to secure these rights, governments are instituted among men, deriving their just powers from the consent of the governed, that when any form of government becomes destructive of these ends, it is the right of the people to alter or abolish it, and to institute a new government, laying its foundation on such principles, and organizing its powers in such form, as to them shall seem most likely to affect their safety and happiness."

Therefore, it is the right of black people to say they do not or no longer consent to being governed by a government that is destroying black people, and wish to separate and institute a new government based on keeping black people safe, protected, and able to live free in a clean environment conducive to their happiness.

(3rd paragraph of The Declaration of Independence)

"Prudence, indeed, will dictate that governments long established should not be changed for light and transient causes, and, accordingly, all experience hath shown that mankind are more disposed to suffer, while evils are sufferable, than to right themselves by abolishing the forms to which they are accustomed. But, when a long train of abuses and usurpation, pursuing invariably the same object, evinces a design to reduce them under absolute despotism, it is their right, it is their duty, to throw off such government, and to provide new guards for their future security."

This 3rd paragraph states that wisdom or good judgment should keep people from overthrowing or changing governments for trivial causes. History has shown that people are more likely to suffer the wrath of bad governments for as long as they can before attempting to change the government they've become accustomed to. Black people have endured slavery, rape, experimentation, forced separation of families, lynching, sodomy, whips, chains, torture, false imprisonment, disenfranchisement, convict leasing, Jim Crow, segregation, police brutality, racism, starvation, murder, molestation, kidnapping, "the war on drugs," mass incarceration, and now they are being shot and killed on the street for no reason.

This long train of abuses that consistently attempts to destroy black people. We have taken all we can stand, it is our right, it Is our duty, to demand reparations from such a government, and provide for the protection and security of black families. Still, many blacks are opposed to any type of reparation because they've become accustomed to the abuses of white society. Historians estimate 65 to 75 million black people were murdered ,during Slavery. The UNITED STATES of AMERICA has committed more atrocities than all of the countries that have been found guilty of committing crimes against humanity.

The UNITED STATES murdered an entire race of Indians, have exploited blacks for more than 400 years, lynched and raped Mexicans, and tortured and murdered Chinese. It will always be a permanent stain on human history that the inhumane crimes of Slavery, convict leasing, Jim Crow, the "war on drugs," mass incarceration and police brutality of Black's ever happened. It will always be an irritation and a nagging question of men and women of conscious as to why did it take so long for us to a stand up and say, we are not going to take it anymore?"

It is the responsibility of the United Nations to ensure equality among countries in the exercise of power within the world system. We have the right to be human, but that right is violated everyday by poverty, not having the ability to have basic needs, such as, food, water, education, shelter, jobs, human dignity, and a healthy environment in which to live. It's time for America to have an honest discourse with itself. The United States could become the greatest country ever to exist, if it would just be honest about its past, and make an honest attempt to remedy it's wrongs.

We the people who have signed this petition understand that the proliferation of police brutality and the murders of unarmed black people has reached epidemic proportions, causing serious harm to black communities in the United States. Therefore, we understand that this harm can only be described as acts of genocide by the United States government. Acts of genocide can also be attributed to the Government's use of taxpayers' resources to wage war on a segment of the U.S. population (black and brown people). This is evidenced by the following; cutting back on welfare, privatization of public housing and land grab schemes, privatization of public education, racist immigration policies, privatization of basic health care, building prisons and the expanding incarceration of millions of black and Latino youth.

The high rate of ethnic minority incarceration is another American phenomenon attributed to genocide. Disproportionate application of the death penalty to blacks convicted of the same crime as white. It is time for truth and reparation. It's time to formally apologize for slavery and make proper restitution! Restitution in the form of land and free mental and physical health care for African Americans. Now is the time for black and brown America to take the issue of inhumane treatment into World Court on the grounds that our human rights (not Civil rights) have been violated.

Please help us by signing this petition!

It will be greatly appreciated if you would sign the petition and pass it on to your friends to sign. Thank you for your support! It is appreciated