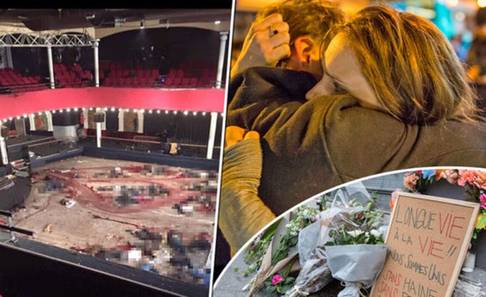 We The People Must Speak! Impeach Obama NOW!

And so it begins.....this pre-planned worldwide assault. The massacre in Paris which ISIS claimed responsibility for, The attack at Garissa University in Kenya, and ISIS claims to have 4000 + ISIS members in the US right now. The same time the attacks in Paris were taking place, Obama states that 10,000 non-Christian Syrian refugees are to be unloaded in New Orleans. Mostly men between 18 and 35. AND WE CAN BET OUR LIVES THEY ARE FILLED WITH RADICAL ISLAMISTS. Yet Obama does not do what is safe for us. It is time to speak!

What Obama forgets, is that he works for the LEGAL CITIZENS OF THE UNITED STATES! IT'S NOT THE OTHER WAY AROUND. HE IS TRYING TO HERD US TOGETHER LIKE CATTLE TO BE SLAUGHTERED. "WE THE PEOPLE" MUST START A PETITION TO HAVE THIS PRESIDENT IMPEACHED AND TRIED FOR TREASON! WE HAVE TO MAKE OUR VOICES HEARD! WE DON'T WANT HIM FUNNELING IN TERRORISTS, WHICH HE IS KNOWINGLY DOING. WHY ISN'T HE BRINGING THE CHRISTIANS OVER HERE? CHRISTIANS HAVE BEEN BEHEADED, RAPED, TORTURED. THE CHILDREN HAVE BEEN BEHEADED, RAPED, AND TORTURED. I'LL TELL YOU WHY, BECAUSE THEY WOULDN'T ATTACK US. REMEMBER WHO ALL HIS ADVICE, ALL THROUGHOUT HIS LIFE, CAME FROM.......COMMUNIST FRANK MARSHALL DAVIS!! IS OBAMA A MUSLIM? I CERTAINLY THINK SO.

WE ARE NOT A MUSLIM NATION. THIS IS THE UNITED STATES OF AMERICA, LAND OF THE FREE AND THE HOME OF THE BRAVE!

OBAMA HAS VIOLATED THE CONSTITUTION MORE THAN 108 TIMES AND HE IS TRYING TO TAKE AWAY OUR RIGHTS AND FREEDOMS.

FIGHT BACK AND LET YOUR VOICES BE HEARD!

PLEASE SIGN!!!!!....AND SHARE!!..simply liking the post won't count as a signature. We need to SHOW that we want this man held accountable and we want him OUT before he can do more damage!!

Obamacare is too expensive for me to even get. I'm not going to get on anything that makes it to where I have a 5000 deductible that must be met before it covers a cent, then where I will have to pay 20 or 30% on top of that. It's really a tax.....it's not "affordable health care". The American people were purposely lied to. It's a TAX. Read up on a man named Jonathan Gruber.

He is the direct cause of ISIS. Don't think for one second that he hasn't known what pulling all troops out caused. We have enough intelligence to know what was happening...

The releasing of 5 senior Taliban members in exchange for a deserter, who are right back to planning attacks on the US.

Obama's attack on the military....dwindling them down to where we are not the super power we once were. His treatment of the military members is nothing short of criminal.

The complete and total disregard and purposeful stomping on the United States Constitution. Not once mind you, but over 108 times. His role as President is to defend the Constitution, not defy it.

His purposeful allowing of illegals coming across the borders and refusing to do anything about it, knowing it puts all legal citizens in jeopardy.

His releasing of thousands of illegal criminals into the streets and REFUSING to deport them.

His releasing thousands of drug felons into the streets. We all know drug dealers carry weapons ..ILLEGALLY, and they will shoot to kill if they feel they have been crossed. Or they will rob and kill to get drugs from someone else, to keep from being ID'd.

His purposeful attack on police officers all over the country, which directly caused MANY officers to lose their lives.

His purposeful race baiting, causing havoc, which has put every American in danger.

His affiliation with the Muslim Brotherhood, a terrorist organization, who wants death to all whites.

Obama's continued attempts to confiscate our guns and end our second amendment rights. He NEVER speaks about where the real problem lies or what will remain. THE ONLY ONES LEFT TO HAVE GUNS, WILL BE THE CRIMINALS, NONE OF WHOM CARRY LEGALLY!!!!!!!

His Iran deal, which they have CONSISTENTLY chanted DEATH TO AMERICA, during the whole thing. The "deal" isn't a deal at all. They will get over 150 BILLION dollars to continue their nuclear weapons race, only now, they will have plenty of our money to do it with. They inspect themselves, we don't do it. Tell me these things do not put us in danger!

And we all know radical muslims have crossed through the borders that Obama refuses to close.

We all know these Syrian refugees are funneling in ISIS members. And the majority are men ages 18 to 35. But we also know it's not limited to just men. Women will also wear suicide vests and children too. This is poses a DIRECT threat to the safety of every American

Now tell me none of these things are Treason....!!

THE DONATION PAGE IS STRICTLY FOR THE OWNER OF THE SITE TO BE ABLE TO CONTINUE TO ALLOW THE PUBLIC TO START PETITIONS AT NO CHARGE. IT IS NOT REQUIRED THAT YOU DONATE.