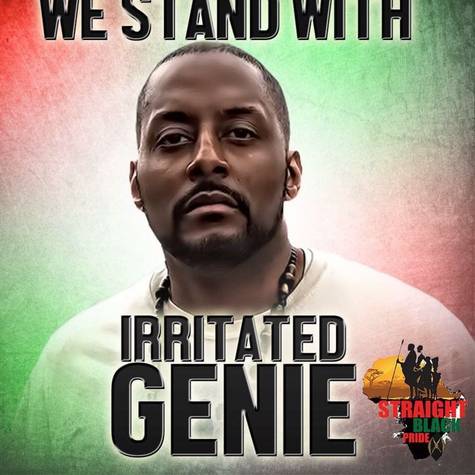 We the descendants of enslaved Africans of support Irritated Genie

An individual of Ayo Kimathi’s (Irritated Genie) mental caliber, should be revered as a beacon within the African family. While watching Irritated Genie’s Speech in Bermuda; “The Effeminization of the Black Male,” Mr. Kimathi said himself that this alone will be 40-50% of what he will discuss in the lecture. I did not hear any racist statements by Ayo Kimathi. As he goes further into the speech, he specifically asks for permission and I quote “Before I go into this discussion, I ‘gotta’ ask your permission. Do I have your permission of my elders, of the sisters, the mothers, of the brothers and of our youth to be honest with you today?” Amendment one in the American Bill of Rights states, ‘freedom of speech and freedom of the press’ once it is proven true. While Amendment nine in the Bermuda Constitution states, “Protection of freedom of expression,” which means and I quote, “Except with his consent, no person shall be hindered in the enjoyment of his freedom of expression, and for the purposes of this section the said freedom includes freedom to hold opinions and to receive and impart ideas and information without interference, and freedom from interference with his correspondence.” I believe that no charge of a hate crime should be placed upon Mr. Kimathi. Mr. Kimathi has a son and a daughter, if you were to use your discretion, you would come to the realization that the words of so-called ‘discrimination’ he used in the lecture represented a man who wants to uphold the African family and promote the black race with racial integrity. The definition of discrimination is, “the treatment or consideration of, or making a distinction in favor of or against, a person or thing based on the group, class, or category to which that person or thing is perceived to belong to rather than on individual merit.” Mr. Kimathi wants to save and help his black race from being oppressed, the white race can’t be targeted by one man. That would be illogical. From my own analysis, nothing discriminatory was said by Irritated Genie.

Ayo Kimathi is the owner, founder and host of War on the Horizon and a representative of Straight Black Pride, these movements and stations, are not made to promote racism against the opposing race, but instead to promote pro-black behavior, Mr. Kimathi wants us to love our black race, and help save us from being mentally enslaved. Irritated Genie is a man of honor and respectable status, who I firmly believe has a good heart. The terms and phrases he uses in his lectures and speeches, are motivations aimed to uplift the black race. Even so, it is impossible for one person be a threat to whole race; i.e. Caucasians. I strongly ask you to reconsider your disposition, because the manner in which an individual views Mr. Kimathi is unfair and he doesn’t deserve this level of oppression from someone that is unable to comprehend the true meaning of African liberation.