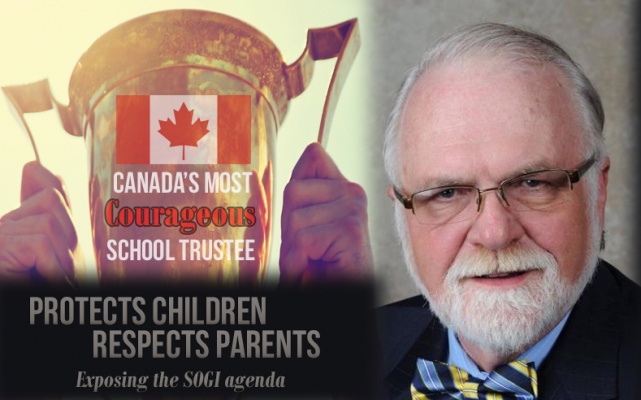 Last week, Barry Neufeld—a trusted and long-serving Chilliwack, BC school trustee—drew the line in the sand against the abuse of both children and the public education system; he said NO to the SOGI Agenda.

Predicably, the squawk-box choir chanted their unfounded and tiresome rhetoric of “bigot”, “hate” and any form of imagined “phobia” available.

Then the biased media campaign began—the one that plays to a few ignorant do-gooders, but for the majority of people raises the alarm that there is something worth investigating and opposing.

It is time for thoughtful citizens, and especially parents of school-children, to send a big “thank you” to Barry Neufeld, and to support him in his courageous stand. Because the sex activist agenda “pushback” has been triggered—big-time.

Let’s send a clear message to the radical left-wing sex activists within the BCTF: that they don’t get to abuse our children and the public education system for their political agenda.

Let’s stand in support of trustee Barry Neufeld for exposing this dangerous agenda and saying “NO” to child abuse.

Let’s send a clear message to the BC Education Minister, Rob Fleming, and all elected officials that they will be defeated if they support this abusive agenda.

Sign this petition and send a united Thank You to Trustee Barry Neufeld for protecting ALL children and for exposing SOGI 123!

THANK YOU Barry! We support you and stand with you and all the other trustees, parents, teachers and education stakeholders who are uniting to defeat this destructive agenda that is a plague upon our schools.

You are truly what a school “trustee” should be. Bravo!!