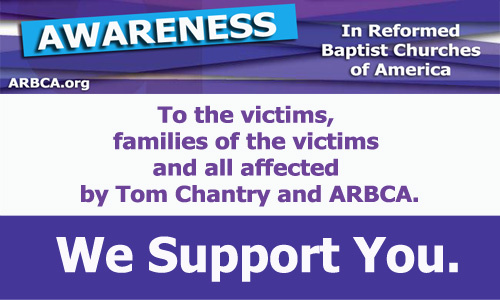 We support the Victims of Tom Chantry & ARBCA

In direct response to the delegates of the 2019 ARBCA (The Association of Reformed Baptist Churches of America) General Assembly:

We, the supporters of the victims of Tom Chantry and the victims of ARBCA (The Association of Reformed Baptist Churches of America), continuing to wait on the Lord (and are still waiting on the completion of legal proceedings as there are nine more criminal counts still to be tried) as well as do our due diligence to stand with the victims and the families against evil and those who have oppressed and continue to oppress them, also affirm the process of justice by which Thomas J. Chantry was found guilty of four counts of child molestation and two counts of aggravated assault on a minor.

We further affirm that this process was SEVERELY IMPEDED by the willful, sinful and criminal cover up by ARBCA representatives. We also affirm this willful, sinful and criminal behavior by ARBCA officials resulted in almost 20 years of pain, anguish, heartache and emotional distress among other things that simply cannot be conveyed or understood by those who have never been victims themselves.

Fair opportunity should have been afforded some twenty years ago for a case to be made to a jury of Mr. Chantry’s peers. However, ARBCA representatives purposefully, maliciously and sinfully delayed due process until this time. This impeding of the law is contrary to the Word of God and the confession the delegates claim to believe and in turn requires prosecution and punishment by the civil magistrate (Rom. 13:3-4; 2LCF 24.1).

In light of this process of justice and its result, and in light of the devastating and far-reaching effects of Mr. Chantry’s criminally sinful actions as well as the criminal cover up of his actions by ARBCA representatives, we, the supporters of the victims express our sincere correction and rebuke of the 2019 ARBCA General Assembly delegates. Furthermore, we affirm the ARBCA 2019 General Assembly delegates statement on this matter falls woefully short of genuine love, compassion and repentance according to the very bible and confession of faith the delegates claim to believe.

We further acknowledge that the delegate’s statement on this matter cannot by itself convey any sincere or profound sorrow or sympathy to the victims of this abuse, to the victim’s families, or to all affected. We pray for salvation and sincere repentance of specific sins specifically by the below named ARBCA representatives past or present.

We pray for repentance for those who still remain in ARBCA, but are not named above.

We pray for biblical fruit bearing in keeping with repentance and that those who have disqualified themselves for ministry would remove themselves or be removed by the biblical process of church discipline.

We pray for the salvation and repentance of these who profess the Name of Christ, but deny Him with their heart actions. We also pray that the dishonor done to the testimony of our Lord Jesus Christ, His gospel, and His Church may in time be overcome. Physical and especially sexual abuse of children are amongst the most heinous sins and despicable crimes that one can commit and must be condemned by all, especially those who follow Christ. Covering up for those who commit such crimes is equally as despicable and must be condemned by all, especially those who name the Name of Christ. This is in keeping with one of the most frequent themes in Scripture —God’s condemnation of the oppressor and those who give hearty approval to acts of oppression or stand idly by and do nothing while others are being oppressed.

Furthermore, we affirm your initiated discussions of examination and reconsideration of your organizational structure and associational documents are spiritually worthless without biblical repentance. As long as the same willfully sinful, unrepentant representatives remain in ARBCA leadership or as member church leaders you will continue to reap what you sow – corruption.