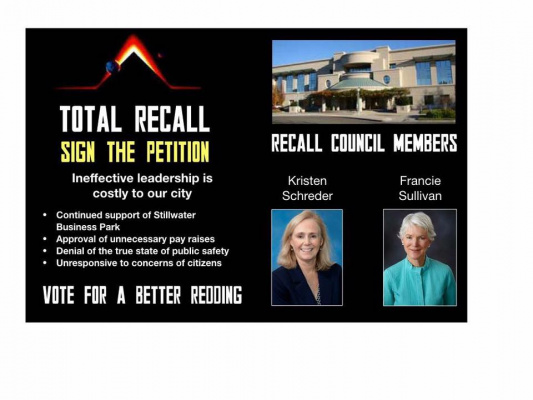 We Support the Recall

As Shasta County residents we understand that we can't sign the recall petition, but that doesn't mean we don't support the recall. Our lives are impacted by the decisions of the Redding City Council on a daily basis. We shop, work, visit and have family in Redding.

We too are frustrated, disgusted and fed up with the decisions of Redding City Council members, especially those stated in the recall. We have watched as these council members have turned a blind eye to the problems in our area allowing the continuing deterioration of our community.

Many of us have been victims to crime in the Redding area. Many have had cars stolen, businesses burglarized, have been harassed or robbed, threatened, and some abused or attacked. Some of us have lost friends or family members to accidents due to a driver under the influence. We have all witnessed the devastation of criminal activity and have all had times when we didn't feel safe. We have changed the way that we live because of the criminal transients that roam our streets at all hours of the day. We have seen open drug activity and have witnessed needles and paraphernalia in our parks, on the trails, in parking lots, and at our businesses.