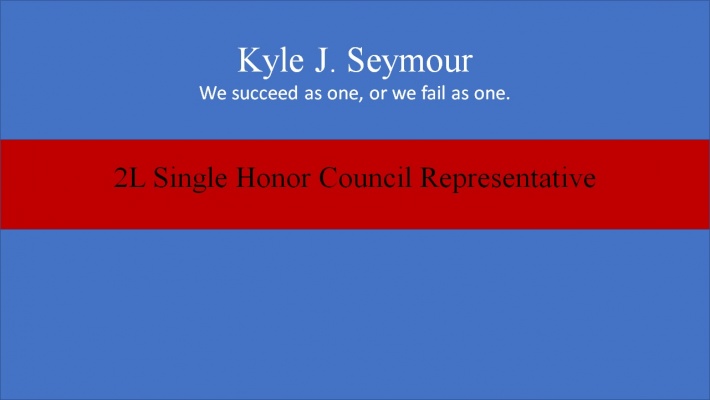 We succeed as one, or we fail as one-Kyle Seymour For Honor Council

We succeed as one, or we fail as one. No matter the severity of the honor code violation, any violation that slips through the cracks will set the whole school back.

After pondering the future of our student body, and the classes of 2023, 24, and now 25, I am here to discuss how I can best serve you.

As we continue (or enter) a new and challenging part of our lives—one full of opportunities—a strong, ethical student body is necessary to succeed in our new endeavor.

A little background about me: I served our nation in the United States Army before law school. My stint in the Army afforded me the honor to work alongside and for individuals from different cultural, ethical, gender, and religious backgrounds. Not only was this experience invaluable, but discipline and standards were ingrained inside me while working with the best of the best.

During my last year in the Army, I was the one individual chosen amongst 10,000 other members to lead, guide, and ethically represent the Better Opportunity for Single Service Members. This program helps commanders address the well-being and morale issues of the single and unaccompanied soldiers in their unit.

During my tenure as President of the Organization, I oversaw the quality of life and welfare of 10,000 single services. Working alongside admirable leaders, I developed a set of core principles: Commitment to Excellence, Integrity, and Servant Leadership.

Amongst these leadership skills is the ability to stand up when ethical violations occur. Countless times in the Army, I stood up and advocated for those who were not heard. For example, soldiers were being placed in living quarters for months on end that were barely livable. I addressed this issue with empathy and confidence. I advocated for these soldiers because, unlike their leadership, I noticed the ethical standards that must be upheld. Through perseverance, we successfully had the living quarters back up to the standard of living and increased awareness of these problems around the installation.

It is moments like these that drive me—to advocate for those who are honest, hardworking individuals who lose their value because of ethical violations. I can assure you; any honor code violation will be handled appropriately. I guarantee you I will stand beside every one of you.

This election is not just about a single position and what I might see as a goal for the school. Instead, it is about electing a representative who will uphold the honor code to the fullest extent possible, no matter the violation. As I did in the Army, I will take the time to listen to every one of you because we either succeed as one or fail as one.