We Stop At Oakwood

WE STOP AT OAKWOOD!

The Eglinton and Oakwood community needs your help to make an Oakwood Station on the Eglinton Crosstown possible.

In January, several elected officials and community partners came together to send a joint letter to Metrolinx requesting that an Oakwood Station be included in their final plans for the Eglinton Crosstown.

With a possible decision in the coming months, a petition by local residents and businesses has been launched to further advocate to Metrolinx and the Provincial Government to include a station stop at Oakwood.

Why an Eglinton Crosstown station at Oakwood?

Promise – It has been in every proposed plan for the Eglinton Crosstown.

Spacing - An Oakwood station would maintain a similar spacing between stations on Eglinton as is currently on the Bloor subway line.

Ridership - The number of residents and transit riders in the area is growing.

Accessibility - Without it, the distance between Dufferin & the Allen Rd is an unfair burden for seniors and others with mobility concerns to access.

Economic Development – It would energize development interest and business activity around Oakwood.

To sign the petition and lend your support to community leaders fighting for an oakwood Station, please enter your information below. 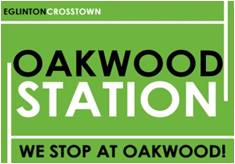