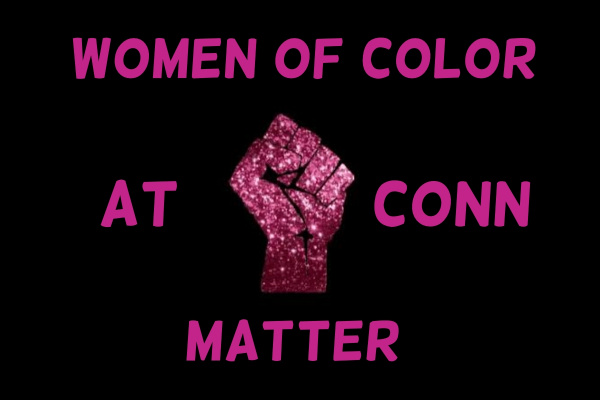 WE Initiative Letter of Concern

As women of color on Connecticut College’s campus, we exist within a space that not only marks us as other, but continuously makes us hyper aware of our otherness. We exist in a space that was never created with us in mind in the first place. And while it is a beautiful thing to be able to exist on this campus, it is still not enough. Existence does not equal an acknowledgement of humanity. Representation goes beyond simply existing, and allows for connection with and insight on people, cultures, and experiences that are present outside of our own realities. People of color’s voices, concerns, experiences, and other aspects of life are equally valid components of Connecticut College’s social/political bubble. However, it never seems to be perceived as important as it should be. Our voices continue to be disembodied shouts into a void devoid of anyone willing to listen to it carefully.

Programs like the Women’s Empowerment Initiative are outlets through which the experience of ALL types of womanhood are supposed to be expressed and embodied. And while being a woman comes with issues of sexism, slut shaming, and bodily violence, race and class also exist within these realms and create varied and dynamic experiences. There is more to being a woman than pussy, sex, and masturbation. But rarely have I heard narratives on that stage that indicates otherwise. Not to say that these aren’t valid issues that exist in womanhood and that they shouldn’t be represented, but they also should not be the sole dialogue presented by the Women’s Empowerment Initiative. As it currently stands, the production comes off as supporting a branch of feminism that is exclusive and outdated. Intersectionality, a term coined by Kimberle Crenshaw (a black woman) is a component of feminism that explores other dimensions of the lived experiences of women that are results of systematic oppression. The lack of intersectionality in the presentation of WE monologues trivializes the lived experiences of women of color. Many other women of color that I have come across love the Women’s Empowerment Initiative, but wish that they could see a part of themselves in it. This is personally my second year in the show, and my third year seeing it. Every single year, I have heard monologues containing things ranging from “f**k you” to “bit**” to other vulgarities, which are great expressions of frustrations that contend with gender and social norms. But in the cumulative execution of the show, it is simply one dimensional. It feels as though that in my participation in the Women’s Empowerment Initiative, I have to put being a woman over being Black, when these identities actually exist in tandem and are inextricably linked to our own unique experiences, perspectives, and insights of life. I haven’t heard a dialogue that discusses things like the pain of existing in a White space, or other tribulations unique to existing as a women of color. And it isn’t like there aren’t submissions that discuss these issues—they simply aren’t chosen to be represented in the show. Our narratives are barely being represented, and if they are they have to be nicely written and articulate. A major concern that extends to this issue is that there are no women of color on the reading committee. And if there is, it is only one, and she is expected to take on the task of being the sole voice and representative of the collective experience of women of color. This is an unfair burden to be placed on her. As a result of the women on the committee not having insight on those unique issues, they cannot relate to certain aspects that happen to women of color. This perpetuates the idea that the experiences of women of color are not notable, simply because they cannot be applied to everyone. As women of color living in the United States, we are incessantly badgered for our culture. We are too loud, too aggressive, and to be perceived as such in a space in which you simply want the equal access and representation that other women have fought for and won, is a slap in the face. Whether it be the use of slang, cursing, and not including narratives like these ignores the stories of a whole group of people that also exist within the realm of womanhood.

The closest WE has gotten to some sort of representation since I've been here is last year’s piece “Ain’t I a Woman," and there was already hesitation and consistent “suggestions” being made to make the piece pleasing to the audience. The issue with that is that we already exist in opposition to the mainstream world, and we do not plan on censoring our existence to appease hegemonic standards of womanhood. Women defy those standards when they declare things like pussy power, so why does it then become offensive if I declare my blackness as power? It is not our responsibility as women of color to ensure everyone’s comfort, especially when discussing issues that cause us discomfort on a daily basis. In fact, the most influential and powerful pieces make people uncomfortable and question their current positionality. The theatrical reimagining of women’s stories is supposed to be a cathartic experience, but when you start limiting what people can say out of fear that it may not be understood, may be interpreted as “racist” or may make someone uncomfortable, you take away someone’s catharsis. Those risks exist in every art form, no matter its content.

There is already a divide that exists within cultural interactions on campus. But to limit students to exist within the default White culture setting allows White students to continue to live in their own world of comfort and makes people of color continue to adhere to assimilation culture. This is especially ironic in terms of the proliferation of Black culture that is extremely evident on this campus. White students get sloppy drunk, use slang (created by people of color) yell the N word at parties while listening to rap and hip hop created and fostered by Black people, and are able to return back to their world of ignorance. That is to say they can experience the world of Blackness without consequence. On the contrary, our position as women of color limits our perceived existence to our stereotypes, and our potential fulfillment of those stereotypes. This is problematic because it points the blame at women of color, instead of the system that demonizes women of color to the positions in society solely. We are not Jezebels, but there are Black women who like to have sex, just as any race. But the creation of the Jezebel trope is not Black women’s fault, nor is it the black women’s responsibility to refrain from sex simply because that trope exists. Relatedly, the potential misinterpretation of our own narratives are not our issues to contend with, nor should they limit the scope of what we are allowed to say in our monologues. This is one example of the pain of contending with unique negative racial societal perceptions, and by not including raw narratives of students who have lived a much different experience, White students do not even have to hear about it. Students of color do not have that same luxury.

A major concern for a revision of a piece accepted into WE, written by the one of my friends who is a woman of color, is that it may not have been accepted at all if she were to add the curse word in it. The fact that the contingency lies on respectability politics is problematic at best. This is supported by other narratives that other women of color have shared with me about their pieces. Whether it be the committee asking the author to change swear words, to complaints of an aggressive tone, it seems as though the voice, tribulations, experience of being a woman of color are still being evaluated through a racist and socially violent lens.

Therefore, we ask that the committee of the Women’s Empowerment Initiative take these points into consideration when revising the bylines, when reading and accepting submissions, and very simply in their interactions with students in their own lives. Due to social positionality, this may have been a perspective that the committee was simply not made aware of. However, now that we have brought it to your attention, to continue to ignore it would be irresponsible, as well as disrespectful to the true values of womanhood. We hope that we can eventually put on a WE show that is reflective of a vast variety of experiences of the women of Connecticut College.