We can save the Yasuni Park

Ecuador is home of a variety of species and many of those species are endemic, that is the main reason because is considered the 8th most mega diverse country in the world, and also, it has the most biodiversity per square kilometer of any country. There are more than 20,000 species of plants, over 1,500 species of birds, more than 840 species of reptiles and 341 species of mammals. Nearly 40% of the land area is forested, 44% of which is primary forest. With this antecedent, we can say that the environmental aspect is crucial for us. The innovative proposal is known as Yasuni-ITT (Ishpingo-Tambococha-Tiputini) Initiative. The Yasuni National Park is perhaps the most biodiverse place on Earth, home of two indigenous people in voluntary isolation (Tagaeri and Taromenane), and also one of the most important oil reserves in the world (846 million barrels). In consequence, it is not only a place with invaluable cultural and environmental richness but is also a significant source of economic growth. The proposal demonstrate the formal commitment of Ecuador to retain the oil reserves located in that area for an indefinitely period, but at the same time, expects an economic contribution (at least half of the profits it would receive in case of extracting the oil) from the international community. It will also prevent the emission of 400 million tones of CO2, the main cause of global warming. From an economic perspective, this creative scheme set a new model based on ecosystem services because is assigning value to immaterial things, which are not being traditionally considered as goods or services. The funds received would be managed by the Multi-Donor Trust Fund of the United Nations Development Program (UNDP). We are showing the world that it does not matter if we are a small country but we are concerned about the environmental, social and economic crisis that we are living nowadays. Ecuador is contributing to fight against climate change and poverty with “local” and “international” initiatives and is just expecting the same retribution from other countries which have not fulfilled their commitment to the environment and to the world. Are you willing to spread this initiative? Do not forget to take a look at the links and post a comment. We can even build an online community about this interesting topic. 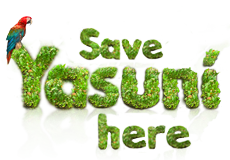