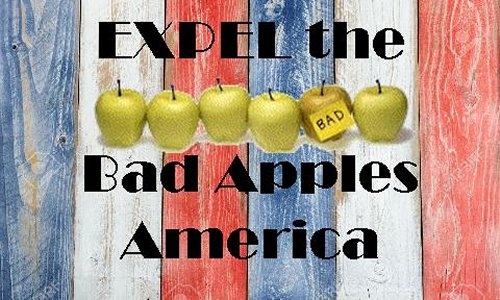 We, the People, call upon our elected officials to remove Bad Apples in the form of Senators who have sought to challenge valid election results in a landslide victory in order to circumvent the Will of the People, by utilizing Power delegated to them under Article I, Section 5, of the United States Constitution, which provides that "Each House [of Congress] may determine the Rules of its proceedings, punish its members for disorderly behavior, and, with the concurrence of two-thirds, expel a member."

Said Bad Apples have been reported to include, for example, the following: Senator Ted Cruz of Texas, Ron Johnson of Wisconsin, James Lankford of Oklahoma, Steve Daines of Montana, John Kennedy of Louisiana, Marsha Blackburn of Tennessee, Mike Braun of Indiana, Josh Hawley of Missouri, and Senators-elect Cynthia Lummis of Wyoming, Roger Marshall of Kansas, Bill Hagerty of Tennessee and Tommy Tuberville of Alabama, but may vary greatly in the final tally.

God Bless America and the Right To Vote!