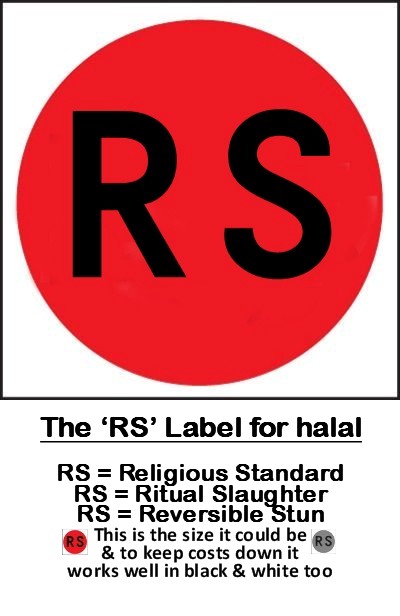 We call on Non-Islamic Governments to curb the Halal Industry

To: The Governments of Non-Islamic Countries
This petition draws attention to a business model developed by Islamic organisation to impose ‘Halal Certification Schemes’ on all people. This modus operandi profits one religion only.
So we propose that the Governments should...
1. Apply the 'User Pays' Principle for Halal Certificates
2. Clearly Label All Religious Standard products 'RS'
3. End marginalisation of workers (on religious or gender)
4. Make conventional food the norm mainstream
We support the freedom to eat according to religious customs. However, there is a vast over-production of halal Ritually Slaughtered [RS] meat (+rejected RS haram meat) & the majority of halal certified products are being sold unlabelled to shoppers & consumers, who are unwittingly buying products that conform to a Religious Standard [RS]. This modus operandi is very wrong and unfair, because these Unlabelled halal certified products & services are covertly profiting one particular religion.
Most food & non-food products are naturally permissible for Muslims & therefore should require no additional halal certification - in fact halal certificates have only existed for about 20 years - they are Bid'ah (a new innovation).
We are concerned therefore about the disproportional growth of halal-certified products & services across many sectors and the extra cost imposed on Businesses & Consumers by this halal Religious Standard [RS]. In addition, most if not all mosques & halal authorities are Registered Charities & therefore get tax breaks - Halal Abattoirs are also Registered Charities (as educational establishments, because halal slaughtermen are untrained and learn by practice), so the tax breaks enable them to undercut conventional abattoirs.
We are particularly concerned about halal Ritual Slaughter [RS] - with or without a Reversible Stun [RS] - which can be seen by Non-Muslims as objectionable religious rite & idol worship. We do not wish to be subjected to unwanted religious practices that profit one particular religion through Halal Certification schemes.
Furthermore we are concerned about gender and religious discrimination sanctioned by Non-Islamic Governments in order that abattoirs comply with Islamic Sharia Law. There should be no marginalisation of workers in the workplace.
Lastly we are concerned about the growth of Halal Food Only served in institutions - Sporting Venues, Airlines, Hospitals, Care Homes, Armed Forces Canteens, Prisons, Tourism Venues & Educational institutions at all levels - many Schools are now enforcing Halal Dinners Only & not allowing parents to provide a alternative packed lunch due to Free School Dinners policy. Why Ban Pork Sausages mainstream when the majority are not muslims?
So we propose the following:
1. Apply The 'User Pays' Principle
If observant Muslims insist on halal certification for their food, then Islamic community organisations shall provide these services free of charge, or cover the extra fees for British suppliers.
2. Insist On Clear Labelling
All products and services from halal-certified suppliers should be clearly labelled by one standard symbol. We should not be relying on the halal industry to label in arabic. We look to government to provide that label and suggest the 'RS' label attached. This way shoppers and consumers can recognise when products or services follow a Religious Standard or when non-food products include bi-products from Ritual Slaughter.
Shoppers & consumers deserve a fair choice and should be able to make a reasoned decision at a glance without time-consuming research into what they are buying.
3. End Workplace Discrimination
In many abattoirs, only Muslim males can be employed as slaughterers. Non-Muslims and women are considered haram - unclean & need not apply. This is sharia law manifest in discrimination on gender and religious grounds and applied with consent of Non-Islamic Governments. Sharia discrimination has no place mainstream.We propose there should be No Discrimination on gender or religious grounds practised in mainstream workplaces at all, unless the employer is a recognised religious organisation. So, similar to religious schools where some exemptions from non-discrimination laws are permitted, abattoirs wishing to conduct ritual slaughter must be owned & operated by a recognised religious organisation.
4. Conventional food should be the norm in all mainstream institutions
All mainstream institutions should be serving primarily conventional food, with other options available.
If the authenticity of halal food is affected by preparing it in a conventional kitchen - the halal industry should look at providing ready meals or in schools for muslim children or they should be allowed to bring in a halal Packed Lunch.
There is a vast over-production of halal & the rejected haram Ritually Slaughtered meat now globally and it is very wrong that shoppers & consumers are unwittingly consuming & buying Unlabelled halal certified products & services that covertly profit a particular religion.
Please curb the Halal Industry in Non-Islamic countries.