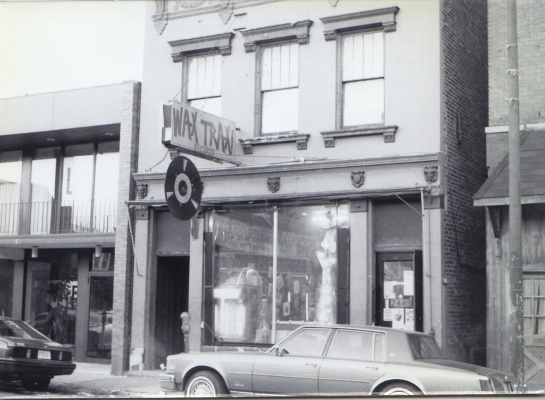 We are asking for your help and a few minutes of your time.
WAX TRAX! RECORDS is trying to designate the original Chicago storefront located at 2449 N. Lincoln Ave. Chicago, IL as an official historic Chicago Landmark.
In addition to having an historic plaque outside the building with information about the influential store and independent label, the status will ensure that the building will not be demolished nor the exterior altered in the future.
This original Lincoln Park building served as the WAX TRAX! headquarters from 1978-1993.

WHY ARE WE ASKING:
For those not familiar with the WAX TRAX! history, the independent record store was the center of underground music and culture throughout the 1980s & 90s here in the Mid-West. Artists such as Robert Plant, Lou Reed, Nick Cave, Black Flag, Buzzcocks, the B-52s and others would shop the Lincoln Ave. location when passing through Chicago.

Before launching the independent label, WAX TRAX! founders Jim Nash and Dannie Flesher would use the N. Lincoln Ave. storefront to promote and produce concerts for then unknown artists such as Joy Division, Bauhaus, The Birthday Party, New Order, Einsturzende Neubauten, Sisters Of Mercy, Divine and more. WAX TRAX! was responsible for bringing many seminal artists to Chicago for the first time and most tickets sold ran through this iconic building.

In 1980, WAX TRAX! founders Nash and Flesher extended their reach by starting a record label of the same name from 2449 N. Lincoln Ave. WAX TRAX! RECORDS is credited for creating a new genre called “Industrial Dance”, later to be shortened to “Industrial” music. Artists such as Ministry, Front 242, My Life With The Thrill Kill Kult, Revolting Cocks, KMFDM, Front Line Assembly, The KLF, Underworld, Coil, Psychic TV, Laibach, and more all got their footing here in the US on WAX TRAX! RECORDS.
The global commercial success of the genre as a whole with artists such as Nine Inch Nails, Marilyn Manson, Rammstein, etc. is a direct lineage to WAX TRAX! RECORDS and this humble storefront.

WHO IS INVOLVED:
The Nash Family is directly involved in this preservation project. Julia Nash, daughter of WAX TRAX!! founder Jim Nash, leads this cause personally as a way to keep the legacy of her father and his life partner alive.

HOW YOU CAN HELP:
By signing our online petition, it will help support our cause as we explain to the city of Chicago the cultural and historic significance of this building. Not only did this location have a profound impact on Chicago, but also influenced countless people from around the world. If you have ever appreciated Ministry, Front 242, TKK, etc. or ancillary artist’s like Nine Inch Nails, this unassuming building on Chicago's north side is where it all began.

WHEN IS THIS NEEDED:
Chicago’s Department of Planning Development will hold their next meeting to discuss possible landmark status on approximately March 15. We need to submit all of the paperwork and petition by March 1.

If this store or label has meant anything to you at any point in your life, we hope you will join us at preserving this important physical piece of music history.
Thank you