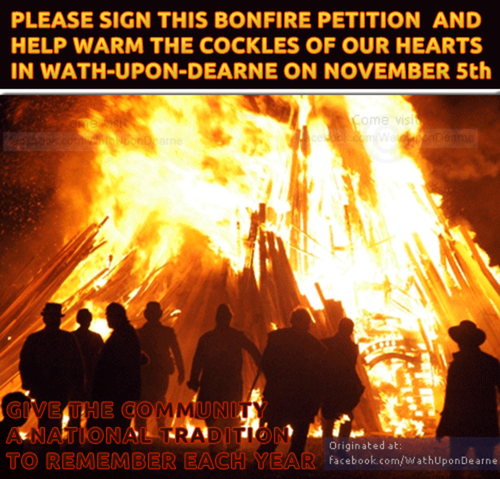 When was the last time you saw a gathering of family and friends at a safely organised community bonfire in Wath-upon-Dearne. Someone will no doubt remember someone who is old enough to remember that is!

But What about the children growing up in the Town?

Each year we hear people asking around "does anyone know where there are any firework displays on such and such a day...?" Apart from the local small clubs and private venues, the answer is nearly always a shrug of the shoulders.

Indeed, the tradition of a grand locally organised Guy Fawkes night has paled into insignificance for the surrounding community in this dear little town we know so well as Wath-upon-Dearne.... But, what if we could stand up as a team in full flight and petition for the re-instatement of the event that was always a well attended venue when it was situated on the recreation grounds below the Supermarket, previously the White Bear pub.

Everything starts from somewhere so why not now; even as the skies are raging with screams and thunderous explosions of celebratory fireworks and rockets as they adorn the night sky.

Today is 7th November 2015, just 2 days after the official anniversary date of the monumental historical event having taken place.

Stand up for yourself, spread the word, share the link, fly the flag... YES, WE WANT OUR COMMUNITY BONFIRE SAFELY ORGANISED EACH YEAR.

Moms and Dads and Kids and Grandparents should all be able to look forward to the gathering and muck in with bits and bobs whether it be tipping the buckets as they go around the crowds or sacking that old wardrobe and transporting it to the woodpile area to supplement the stack.

SIGN HERE AND LET'S GET BUSY WITH YET ANOTHER WORTHWHILE COMMUNITY PROJECT.

IT'S NEVER EVER TOO LATE TO VOTE...

EVEN RIGHT UP TO THE LAST MINUTE WHEN THE DECISION MAKERS ARE DELIVERED A WORTHY COLLECTION OF SIGNATURES REQUESTING THEIR COOPERATION FOR THEIR TOWNS-FOLKS' EXPRESS WISHES...

WELL... isn't that why we voted them in in the first place.