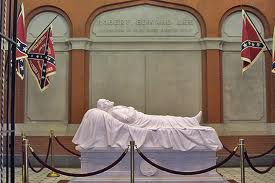 Washington & Lee University, keep the Confederate battle flags inside the Lee Chapel tomb where they belong.

We want Washington & Lee University to not contribute to more of this country's downfall by political correctness and keep the Confederate battle flags that are housed inside the Lee Chapel tomb right where they are. The flags have been housed inside the chapel's tomb for decades and have not hurt anyone! They are there not to offend anybody, but rather are there as a reminder of General Robert E. Lee's service and sacrifice to the Confederate States of America and should be respected as such. I, and many other people in this country have had ancestors fight for the South in the war between the states and we don't apreciate constatly having to hide symbols that are both a part of our cultural heritage as Southerners, as well as a part of our nation's history all because political correctness dictates it.