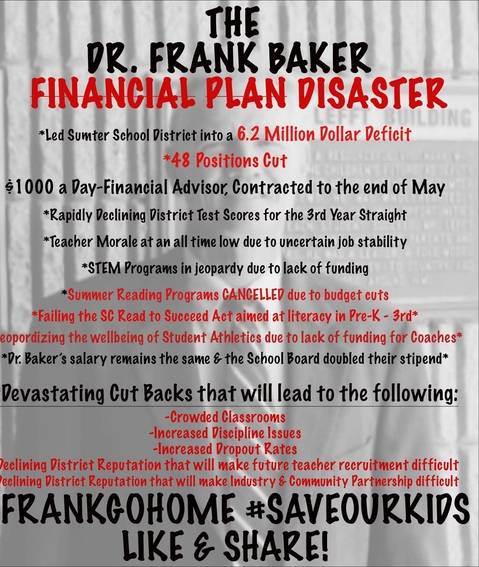 Vote of No Confidence in Sumter School Board/ Dr. Frank Baker Should Resign

All parents, students, and tax-payers should be thoroughly disappointed by the recent fiscal crisis surrounding our school district. Our school board is comprised of individuals that were voted in by the tax payers of Sumter county. These are individuals who made certain guarantees to we the citizens of Sumter County. They made guarantees regarding their intent to promote and defend the interests of the students, teachers, and stakeholders of this district. Instead, it appears that this group is not a community conglomerate, but rather a corporate one. The only interest that has been defended by our board are that of a superintendent in Dr. Frank Baker, who has not once, but twice presided over school districts that have gone millions of dollars over its proposed yearly fiscal budget.

Perhaps more disturbing, disheartening and outright insulting is the board’s stance regarding this matter. After the results of the audit had been released, the only statement made by our board was that it takes full responsibility for the deficit, as though it were a personal loan that had been defaulted on. The treatment of this matter has given me the impression that those who are leading our district are inadequate; they seem to be unaware or in total disregard of the fact that these millions of mismanaged dollars belong to the taxpayers. These taxpayers paid this money as a part of their civic duty, but also as a seed of hope for a brighter future through the promise held in our children. In the midst of over 20 financial meetings, the Board was unable to keep a handle on the state of district finances.

Please let me state a fact plainly, however: that in attending Board meetings, there seems to be no oversight. There seem to be only nodding heads with no interest in information needed for informed decisions. Only Dr. Johnny Hilton and Dr. Ralph Canty seem to call anything into question. The rest seem only there to empower the superintendent.

A deficit of over 6 million dollars (and based on the opinion of several with experience and knowledge, it’s estimated to be about 14 million dollars over the course of 24 months), says that those interests have taken a back seat to apathetic oversight.

No matter how sincere the comments of Board Chair Rev. Daryl McGhaney, he and the other members of the board need to be aware of the following: you can not take responsibility for what you cannot personally replace or reconcile--in full.

To date, I am unaware of any charitable donations made by any member of the board toward the reconciliation of the deficit.

We are left, in light of these events, with a somber question which bears an immediate and thoroughly considered answer: who is truly in charge and whose interests are the primary concern of our school board? The community has yet to receive any answers or information regarding how this money was lost. What expenditures led to such a great deficit? Who approved these expenditures and for what reasons? None of these questions have been answered or, for that matter, even asked.

Something is beyond not right about that.

Children are the lifeblood and future of any growing family/community. To ignore the great disservice that has been done toward these students, the teachers who work with limited resources to provide a quality education and the community who trusts the district to produce educated and globally-prepared members of society would be like forsaking our investment in the future.

Now there are rumors of schools that have educated the citizens of Sumter County for decades being closed down in the name of one man’s mistakes. Nearly 50 teachers and staff will lose their jobs because of this mess; this takes place while teaching staff, administrators and district office personnel who are officially retired work five - ten years and longer beyond retirement at exacerbating salaries, performing jobs that would cost taxpayers less in the hands of employees with fresher ideas and lower salaries.

Tales of rampant nepotism, improperly issued contracts and unjustifiable salaries under this superintendent’s administration are surfacing and leaving citizens in search of the truth.

The money of our district is somewhere, but no one is saying anything. At all. We are left with vague, pointless, non-informational answers that leave us still with a 6 million dollar deficit and more questions. Someone must give an account. The fact that Dr. Baker’s negligence in maintaining proper oversight of the district’s spending indicates he should not be in charge of so large a responsibility. Who do we go to for answers? The fact that this question must be asked suggests that we need a new superintendent. It's time for Dr. Frank Baker to preserve what remains of his legacy and retire. If the Sumter School District Board cannot perform their duties, A Vote of No Confidence should be presented at the next school board meeting in February!