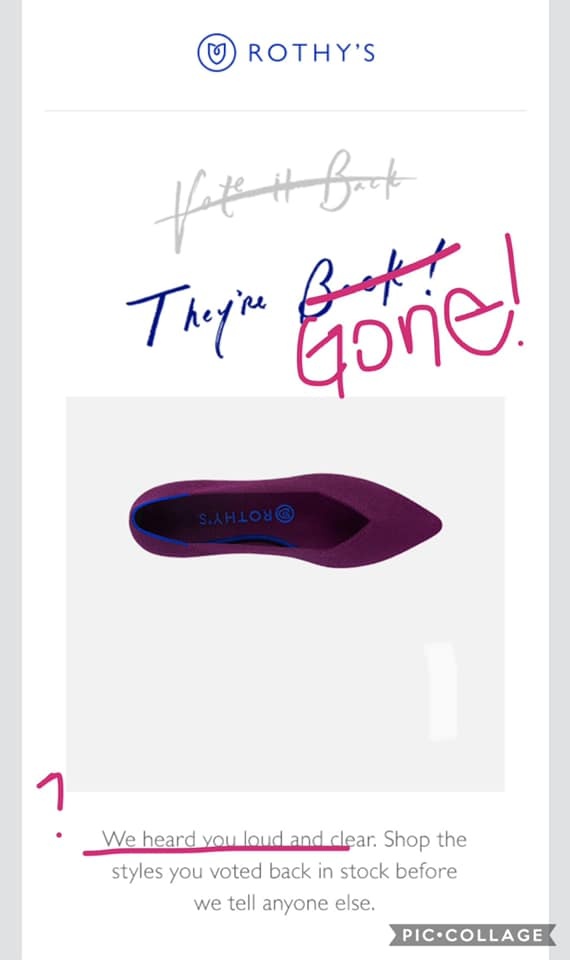 What ever happened to the Vote it Back (aka VIB) that Rothy's started last year? These VIB are essential for many of us for several reasons. One, is that most of these older styles never came in sizes over an 11 and therefore are unattainable to a LARGE part of your fan base. Secondly, with your fan base growing MOST of us LOVE the styles you created from 2016-2019 that are now on the 2nd hand market for astronomical amounts, IF you can even find them. Doesn't Rothy's want that revenue? We loyal Rothy's Addicts, who have signed this petition, want to see a return of this regular VIB release. WE NEED IT! Please BRING IT BACK! It's been about a year now. This would show your loyal customers that you DO care about us. Many of us haven't felt that in a loooong time. We are sincerely hoping you will listen to SO much outcry for VIB! *Examples of shoes we'd like to see Voted Back are, but not limited to:

*We just share the following potential VIB's to show you how much desire there is for the older styles we do not expect them ALL to be Voted Back. It's just more powerful to show you the demand in styles out there between 2016-2019

Pink Camo flats (points in these would be AMAZING too but that would be a new release).