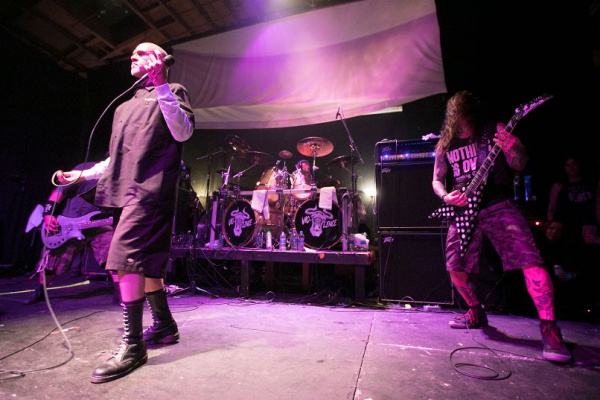 Vio-Lence were one of the bands (along with Exodus, Testament, Death Angel, Forbidden, Heathen, just to name a few) that spawned the Bay Area thrash metal scene in the 80's. They released three full-length records and had a few lineup changes (most notably with guitarist Robb Flynn leaving the band in the early 90's and eventually going on to wider audiences with his own band Machine Head) during their initial eight-year run, which lasted from 1985 to 1993.

Now fast forwarding to 2019: Vio-Lence has been back together, though the band now includes four-fifths of the classic "Eternal Nightmare" lineup (vocalist Sean Killian, guitarist Phil Demmel, bassist Deen Dell and drummer Perry Strickland) while Ray Vegas takes Flynn's place on guitar. The band intends to be performing a series of occasional live shows this year and already the members (particularly Demmel) have discussed the possibility of new music, something many of Vio-Lence's fans would love to hear.

If Vio-Lence intends to release new material at some point down the road, whether it'd be an EP or a full-length record, not only should they write at least one new song, but also revisit some of the unreleased songs (including "All Good Dies" and "Put Them In"), or the material from the album that Demmel wrote during Vio-Lence's previous reunion from 2001 to 2003 (including "Fuck Peace") and mentioned in interviews, or both and put them on the record. As for who should release the new material, one of (if not the only) the record companies that's seemingly capable of signing a veteran thrash metal band in 2019 is Nuclear Blast.

Signing Vio-Lence to Nuclear Blast will not only put them in the same room with those signed to the label (including Slayer, Exodus, Testament, Death Angel, Sepultura, Kreator, Destruction, Exhorder, Forbidden, Heathen, Overkill, etc.), but it will also help promote and realize the band's vision, unlike the experiences they had in the late 80's and early 90's with MCA/Mechanic and Atlantic/Megaforce. With this being said, let's get this petition out there and shared to as many fans as possible to let both Vio-Lence and Nuclear Blast know that there are some fans want to hear some new music, and with the release of their last full-length album dating back to 1993, it's long-overdue.