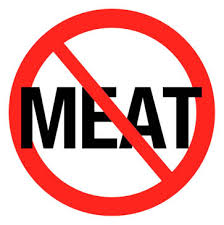 When many people think of the term vegetarian, they picture a hippy-like, PETA supporting salad eater. Critics often pity vegetarians for their inability to eat meat, the cynosure of the Western diet, and see them as isolated from the advancing world. However, despite modern beliefs, the ideals of vegetarianism are not as unilateral and facile as their stereotypes. For instance, many don’t realize that there are various forms of vegetarianism. Lacto-vegetarians include milk products in their diet and lacto-ovo-vegetarians include both milk and eggs, while vegans exclude the consumption all meat and meat based products (Adams, Carol J).

So, if the ideals of vegetarianism have existed for centuries, why is there a stigma against not eating meat in our society? Why are vegetarians viewed as unconcerned and ignorant towards the advancing principles of western culture? In western culture, meat is viewed as an essential component in everyday life; many belief that the absence of this nutrient is absurd and unreasonable. But, is this truly the case? In reality, the only reason for the lack of vegetarians in westernized societies is because of the false assumption that one must eat meat to maintain their energy. However, due to the population boom that has rendered society increasingly dependent on the consumption of excessive quantities of meat, a vegetarian diet serves as a lifestyle that is not only better for people, but also beneficial to animals and the environment.

Over the years, research has indicated that eating a vegetarian diet is healthier for the human body than an omnivore diet. According to a 2013 Oxford case study, heart disease, high blood pressure, adult-onset diabetes, obesity, osteoporosis, and certain cancers occurred less often in people who were vegetarian. The traditional ‘American Diet,’ consisting of meat products high in cholesterol and saturated fats and low in fiber, has been under scrutiny in regards to its unhealthiness. Cancer, heart disease and diabetes, which together contribute to a total of sixty-eight percent of all American deaths, are believed to be heavily influenced by this diet (Flynt, Cheryl). Many red meats and processed meat based products are high in saturated fats, which then raises LDL cholesterol, increasing the risk of coronary heart disease. Unlike a diet high in saturated fat, milk, and cheese, a diet sustained by whole grains, fruits, vegetables, nuts, and seeds provide the body with the ammunition needed to fight disease and illness. In fact, many doctors even recommend vegetarianism as a dietary therapy for a variety of conditions, including heart disease, high cholesterol, type 2 diabetes, and stroke.

Many people also believe that sustaining a vegetarian diet is unachievable due to the fact that plants cannot provide the human body with the nutrients found in meat products, such as protein. However, a vegetarian diet has been proven to provide the same, if not more, nutrients as a meat-based diet would. Despite the notion that protein is only found in meat and animal products, a variety of plants such as cooked dried beans, nuts, seeds, and soy products also provide the same nutrients. Even though red meat is a major source of iron in Western diets, vegetarians actually have higher iron intakes than non-vegetarians. Beans, fortified cereals, whole grain products, tofu, dark green leafy vegetables, and seeds are examples of iron rich foods. Eating at the primary level (organisms that make their own food) also allows humans to obtain the most energy possible and as quickly as possible. Every organism only passes ten percent of its energy to its consumer. Since most animals eaten by humans consume plants, this means that humans only receive one percent of energy, as compared to the full ten percent obtained when eating plants. Thus, by following the ideals of vegetarianism, people are able to sustain a proficient yet efficient diet.

In the year 2005, there was more livestock in the United States than there were people in the world. Due to the increased demand for meat, many livestock ranchers try to maximize their profits by raising livestock in the most efficient way possible, resulting in the lack of ethical treatment towards animals. For instance, many farmers will practice products on animals that will not benefit them in any way. The most common form of this is genetically modifying livestock to enhance their usefulness to humans; growth hormones are frequently given to animals to expedite their enlargement and to raise the largest livestock possible, generating the highest profit. This method not only fails to assist the animal in any way, but also could prove to be detrimental to their health. Because farmers raise them to grow as quickly as possible, many times enlargement of the animal’s body overpowers its capability of supporting itself. In fact, chickens from large commercial farms have been reported to grow so rapidly that their legs break from not being given enough time to adjust to the weight.

Many animals currently being raised on commercial agriculture farms are kept in confined spaces, creating a toxic environment for the animals and arousing speculation over their well being; farmers have neglected the condition of the animals, possessed by the desire to produce quantity rather than quality. For example, there currently is no federal regulation that adequately protects livestock while traveling over long distances. The Twenty-Eight Hour Law of 1873 was the first federal law regarding the welfare of livestock, stating that farm animals must be rested and watered at least once every twenty-eight hours during the journey (Fellenz, Marc R). However, at the time, livestock transport was only done by rail, so the law was only enforced on railroad transport of livestock. In 2005, Compassion Over Killing, an animal rights group, organized an undercover investigation of a pig transport, documenting the suffering of the animals crammed onto a truck and forced to travel for extended periods of time. The U.S. Department of Agriculture (USDA) then launched its own investigation after discovering that more than 150 pigs transported by truck for more than twenty-eight hours in the summer heat arrived dead at a livestock facility in Texas. Even though in the end the USDA agreed to include truck transport to the law, the incident illustrates the lack of care many farmers hold for their animals.

Similar to this flawed method of tending these organisms, despite many farmers and defendants of animal agriculture claim that animal cruelty regulations adequately protect the rights of animals, much of their reasoning prove to be invalid. In January 2001, the American Meat Institute stated that "optimal handling is ethically appropriate, creates positive workplaces and ensures higher quality meat products," essentially asserting that the high productivity in the industry proves that animals are being treated well ("Farm Animals"). In other words, because there are so many of them, the animals must be thriving, reflecting a just system. Defendants also reason that livestock farmers practice morally ethical care for their animals because it results in “calmer” animals. Tranquil animals then lead to a calmer, safer working environment for workers and to a higher quality of meat. However, a higher productivity rate indicates the efficacy of the poultry system, and does not parallel to the welfare of its animals.

Environmentally aware consumers falsely perceive ‘organic’ meat products as a better purchase. However, the term ‘organic farming’ has lost its intended meaning and alternatively simply makes many consumers feel more ethically moral by purchasing products labeled ‘all natural,’ ‘cage free,’ ‘grass fed,’ ‘pasture raised,’ ‘free range,’ or ‘free roaming’ (Linzey, Andrew). Instead, these labels are marketing ploys utilized by farmers, since they are not clearly defined or verified by regulatory agencies or animal welfare groups. For instance, ‘Cage free’ or ‘Free Range’ chickens most likely means that the chickens may not be locked up in a cage, but thousands of them are clustered in a small warehouse where they are never let outside.

The assertion that the over consumption of fossil fuels holds to be the leading detriment to the environment has been drilled into the minds of nearly every American since elementary school. However, recent studies have indicated that at fifty one percent, the largest contributor of climate pollution is in fact a direct result of the over consumption of meat (Spotlight: Livestock Impacts on the Environment). The expansion of the human population on earth parallels with the demand for animal products and the detrimental environmental effects that come with its cultivation, such as the need for more land to sustain the livestock. Once primarily focused on the countryside, animal husbandry has now dominated the land. Livestock cultivation currently occupies forty five percent of Earth’s total land and is worth over $1.4 trillion, making it the single largest anthropogenic use of land (Thornton, Philip, Mario Herrero, and Polly Erickson). Urban and peri-urban areas are now being utilized to not only raise livestock, but also to raise food for them as well. In fact, twenty six percent of Earth’s land is used for grazing and one third of all terrestrial surfaces is used for producing feed crops ("Livestock and Climate Change"). Yet, despite the global production of crops, hunger still remains a prevalent issue among third world countries. The amount of food produced can actually feed every mouth on the planet, however the demand for meat in first world countries results in its misuse.

Unfacilitated waste managements eventually lead to large areas of ocean dead zones. Currently, there is no protocol or efficient way to direct or dispose of animal waste. While manure application can be beneficial to soils in many ways, it unfortunately can also have negative impacts on the wider environment when not implemented correctly. Manure application causes an increase in nitrogen and phosphorus which is then dissolved into runoff water. Applying manure inconsistently in large amounts or applying manure too frequently at low amounts may exacerbate the system’s ability to process these nutrients, thus releasing nitrogen and phosphorus into nearby streams, lakes, ponds, etc. This then results in the detrimental processes of eutrophication. Algae takes the increased amount of nutrients, resulting in a boom in its population, known as algal blooms. Algae then prevents other organisms from obtaining nutrients, oxygen, and sunlight, creating dead zones.

Commercial animal husbandry has deleterious ramifications, including the unethical treatment of animals, the eradication of available land, and the impairment of our environment. Moreover, disregarding the pleasure of enjoying the taste of meat, there are no other benefits that are not also obtained when eating a plant based diet. Therefore, a vegetarian diet deems the only option to quell this problem. By sustaining the human body in the most efficient way, less land will be seized from the natural environment and animal suffering and environmental destruction will be significantly limited.