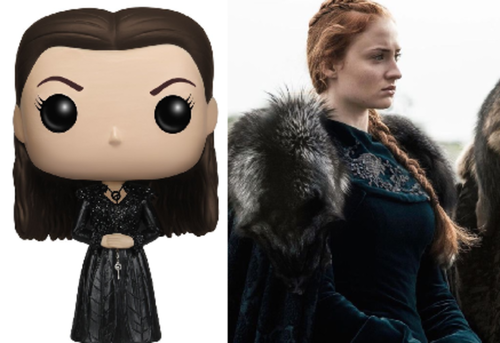 This petition is to show Funko that Game of Thrones fans want a new variation of the Sansa Stark figure that they have available.*

There are many Pop! Funko GoT figures available to the public at the moment and there will most certainly be more to come before Game of Thrones ends. Among these figures are plenty of character variations, giving people the option of what they may want their figures to look like. Take the Jon Snow figure for instance: a person could buy a Pop! Jon Snow with the cloak, without the cloak, with the blood splatters on his chest, etc. There are plenty of choices for that one character, and this is a trend throughout many of the different sets of figures that are available.

Sansa Stark, however, only has one figure with no variations--the figure of her in her "Alayne Stone" outfit. Technically, this means it's not even a figure of Sansa, but a figure of the identity made for her to take on when she is in hiding. Game of Thrones fans have grown to adore the character of Sansa over the years, and it would be a shame if they only had the option of buying that figure for their collections, as it isn't even technically truly Sansa Stark.

The public has shown an interest in having a figure made that is based on the outfit Sansa wears in season 6 episode 9. This outfit is one she sews herself, and it reflects her true identity as a Stark (complete with a direwolf sigil). If a figure based around this Sansa outfit were made, it would reflect the real Sansa, not just some identity she has to hide behind for a short period of time. Not only that, but enough people are interested in this figure being made that it would be lucrative for Funko to consider creating a variation figure based on this outfit.

Sansa is an important enough character to the show that it's about time she get a variation. It is the hope of the creator and signers of this petition that Funko considers the request for a variation Sansa Stark figure based on the outfit mentioned above.

*The creator of this petition would like to encourage signers and people viewing this petition to also email Funko directly (contact@funko.com), as they are interested in hearing directly from consumers about what future figures they might want to make available for purchase. This petition is mostly just to get an estimate on theoretically how popular a new figure based on Sansa's season 6 direwolf dress outfit would be. Please, if you sign this, email Funko as well!