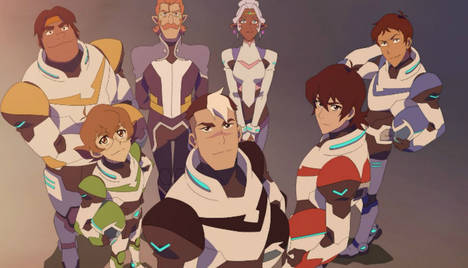 The goal of this petition is to get precise ages for all the main characters from the Dreamworks animated series Voltron: Legendary Defender.

The writers and producers of Legendary Defender have been unnecessarily vague about the ages of the main characters - Allura, Hunk, Lance, Pidge, Keith, and Shiro - despite fans' asking for canon ages since the first season aired in June of 2016.

Up until now, the answers fans have gotten have been vague, and frankly a large portion of the fanbase finds this ridiculous. Why keep such basic character facts a secret? Revealing the ages of these characters won't spoil any of the plot details that are to come in future seasons, and only serves as an inconvenience to fans. Other animated children's shows such as Star vs. the Forces of Evil and Gravity Falls have confirmed their character's ages with no repercussions. If anything, it only makes fans more willing to engage with and continue supporting the show.

The recent video in which Joaquim Dos Santos refers to Princess Allura, one of the main characters, as a teenager has caused tidal waves amongst fans as a majority of the show's fanbase had interpreted interactions between Allura and Shiro, another one of the main characters, as romantic. The problem here is that in a video from San Diego Comic Con 2016, Lauren Montgomery, Tim Hedrick, and Dos Santos told fans Shiro was 25. As most people know, a 25 year old and a teenager should not be interacting romantically.

So what are we, the fans, supposed to make of this?

It makes us insecure, it makes us distrust the writers and producers of the show, it makes us angry, and it has made many fans distance themselves completely from the show.

The goal with this petition is to get answers. The fanbase wants to know the ages of the characters, a harmless fact that will not spoil any future plot details.

What will be achieved by giving the fans precise ages?

We will start trusting and believing in the team behind Voltron: Legendary Defender again, we will be more inclined to engage with the show and share it with friends & family, and we will keep supporting the show.

Hopefully this get enough signatures to garner the attention of the show's creators. Perhaps, once they see how many of us are dissatisfied, they will stop with these ridiculously vague statements and give us some numbers.

UPDATE: Once the petition has reached its goal I’ll put the signatures in a PDF file along with a letter that will be e-mailed to DWA. The letter will include a description of why the petition was held and a general explanation of why the ages matter to the fans.

Now here’s how you can take part in constructing the letter; I’ve opened the submit box on my Tumblr for anyone who would like to send in a statement. In your statement, all you have to do is explain why the ages matter to you, and why you would like concrete numbers. The statements will be added to the letter.

Lastly, please consider sharing the petition to spread the word!