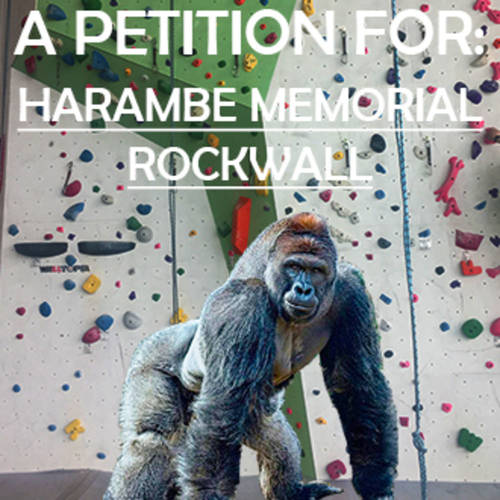 In May of this year, one of our closest friends and role models, the Gorilla Harambe, was slain by bullet in a completely avoidable tragedy. Since than the whole world has united behind our champion. We have been outraged, we have cried, and we have laughed remembering the good times; but most importantly, we have longed for a way to honor him.

As a united student body here are Utah Valley University, we plead with the administration to name our incredible climbing rockwall in memory of Harambe. Climbing was his favorite hobby and we feel like this is how he would have liked to be remembered. We propose the name to be "The Harambe Memorial Rockwall"

We understand that many online "trolls" have belittled his name, making it some kind of joke. We do not condone this light hearted attitude, nor do we seek the support of those that feel this way. As individuals who feel strongly that animals are mistreated, and that the oppressive zoo system is fundamentally flawed, we feel that through Harambe, we can raise awareness to people throughout the world that animals deserve our respect, and reverence.

Pleas sign this petition and join us to honor Harambe!