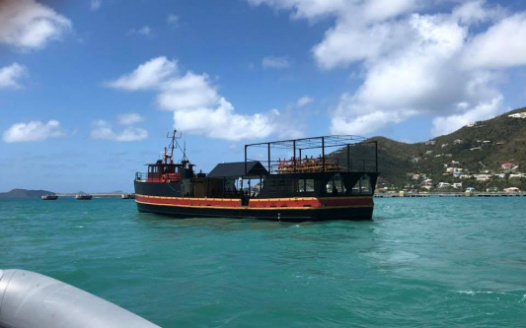 The world famous Willy T, the iconic floating bar previously moored off of Norman Island, was wrecked in Hurricane Irma. The owners of the Willy T have been hard at work for months (the boat looks AWESOME) and spent half a million dollars (that's some serious cash!) and just brought her back down to the BVI. Instead of being welcomed back, the BVI government told the owner, Ewan Anderson, that they would not allow him to moor in his spot, telling him that there is a developer on the island who no longer wants his ship in the bay (I'm sorry, come again? We are just shaking our heads over here on STJ). The Willy T ROCKS and this is absolutely absurd. We rely on tourism and their hard work in returning one of the great attractions being met with this reception is in my opinion, is just a bunch of ___. SO, we think we should show how LOVED they would be in the USVI!!!!!!! Just imagine if we no longer had to clear the ridiculous customs costs to go hang on the Willy T!!!! Not just for drinks but they also have amazing food!! That would ROCK! Come on guys-let's show them the LOVE and we will post it on their page. Our recommendations for anchorage are on St. John (cause we live here so we want that haha) but we think Hansen Bay, Frank Bay, Great Cruz Bay are all good options, and heck, maybe even Cruz Bay! We are boaters and charter operators so we did put a lot of thought into those ideas.