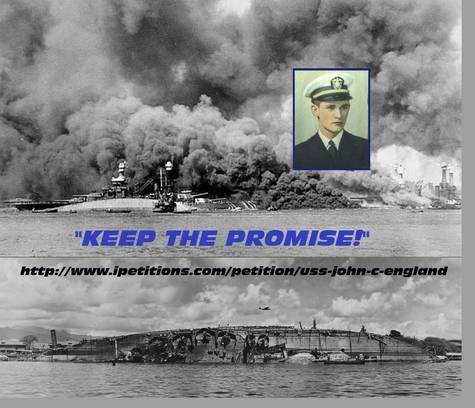 On this 75th Anniversary of the attack on Pearl Harbor, We are hereby petitioning the Secretary of the United States Navy to honor Chief of Naval Operations, Admiral E. J. King's promise "There'll always be an ENGLAND in the United States Navy." and commission a USS England, to recognize and honor the service and sacrifice of Ensign John Charles England.

John Charles England was born in Harris, Mo., on December 11, 1920. He enlisted in the U.S. Naval Reserve as an Apprentice Seaman at Los Angles on September 6, 1940 After active duty training on board the USS New York from November 25, to December 21, 1940 he attended Naval Reserve Midshipman's School, New York, N.Y. and was appointed Midshipman, USNR, March 6, 1941. He completed his training on June 5 and was commissioned Ensign, USNR, June 6, 1941. He was next assigned duty under instruction at the Naval Radio School, Norton Heights, Connecticut, reporting June 20, 1941. Upon detachment from school, he reported on September 3, 1941 to the USS Oklahoma at Pear Harbor.

During this period he had also married and in early December he was eagerly awaiting the arrival of his wife and three week old daughter (Victoria Louise England) who were do to arrive in a few days. He had never seen his daughter.

On the morning of December 7, 1941, just four days from his 21st birthday John C. England volunteered to work in the ships radio room for a friend so that he might have more time with his family when they arrived. That morning the Japanese attacked Pear Harbor and the USS Oklahoma was one of their first targets.

Oklahoma was moored Battleship Row 7, outboard alongside Maryland. USS Oklahoma took 3 torpedo hits almost immediately after the first Japanese bombs fell. As she began to capsize, 2 more torpedoes struck home, and her men were strafed as they abandoned ship. Within 2O minutes after the attack began, she had swung over until halted by her masts touching bottom, her starboard side above water, and a part of her keel clear.

Ensign England survived the initial attack and escaped topside as the ship was capsizing. He remembered the men still in the radio room. He returned three times to the radio room, each time guiding a man to safety. He left to go back below decks for the fourth time and was never seen again. He was one of twenty officers and 395 enlisted men were killed on board USS Oklahoma that morning. Ensign England's gallant effort saved three, but cost him his life. He never saw his daughter...