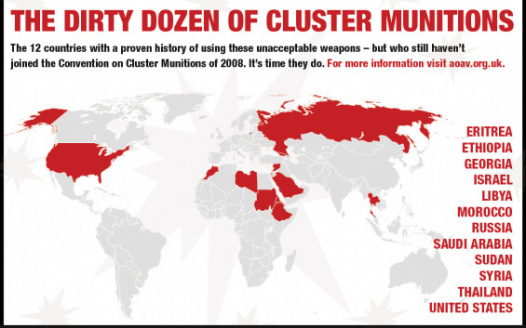 Call on the U.S. government to ban cluster munitions

A cluster munition is a weapon that opens up in mid-air to release multiple (in some cases hundreds) of small explosive devices called submunitions, which then strike the ground over an area that can be equivalent in size to several football fields [2]. Anyone in this extremely large "strike area" is in serious danger of being killed or severely injured, regardless of whether they're a soldier or a civilian, an adult or a child.

119 countries around the world have already signed the Convention on Cluster Munitions, pledging to never again use, produce, transfer, or stockpile these horrific weapons. The United States of America isn't one of them and this needs to change.

Please take a stand against the fear and misery cluster munitions cause by adding your name to this petition and sharing it on social media. Together, we can make the world a safer place.