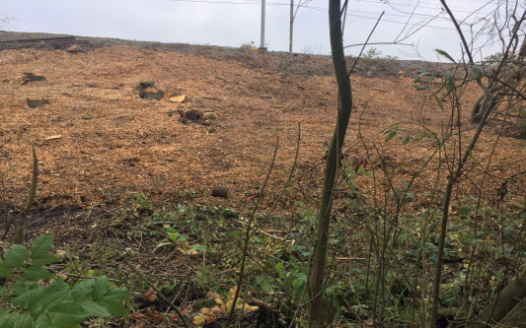 Network Rail has embarked on their so called 'Vegetation Management Works' without an acceptable level of engagement and consultation with the local community.

Unfortunately, part of the trees and natural vegetation along the railway line has already been razed to the ground and destroyed the beautiful and natural environment around Bluemels Park and, in the process, destroyed the habitat of the wildlife in the area.

It is inconceivable that Network Rail can be allowed to continue progressing these works without any matter of control being exercised on what they can and cannot do.

A convoy of Network Rail's contractors turned up unannounced on Tuesday/Wednesday (26th and 27th September 2017) to progress the works but, fortunately, one of our proactive residents managed to stop their operations for the day. However, the contractors were back on Thursday 28th September 2017) with the instructions to 'carry on with the works' and they continued with their operations butchering our lovely landscape. After considerable efforts from some residents and excellent support from Councillor Sally Bragg (Wolston and Long Lawfords Ward), we managed to temporarily stop the work.

We have established an action group to stop these works immediately and to ensure that Network Rail is forced to have a proper dialogue and engagement with residents of Wolston in order to achieve an acceptable solution. We have also made representations to Mark Pawsey MP and sought his intervention and support with this matter.

We appeal to all residents, friends and stakeholders in Wolston and surrounding areas to support this petition and stop Network Rail from continuing to execute this wanton damage to our environment and natural beauty of Bluemels Park and Wolston.