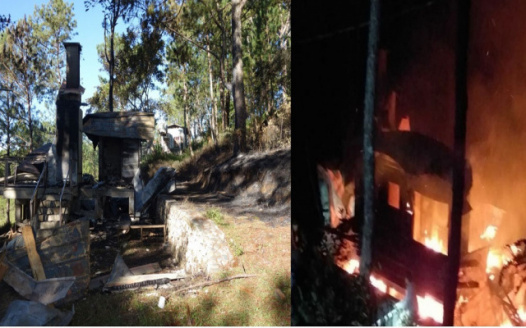 Strongly believed to be arson, four blasts of heavy explosions followed by rapid pealing of the church bell gripped and disturbed the people of Sagada at 9:10 0’clock late evening of November 8, 2018. Residents and so with officers and personnel of the local government unit, Bureau of Fire and Philippine National Police rushed to Kiltepan Viewpoint to see that two structures are already burned.The two buildings are owned by businessman Wilson Capuyan from Ambasing, Sagada.

Police investigation revealed that exploded IEDs (improvised exploded devise) were found at the private room and concrete flooring of the bungalow house (restaurant) while four sets of explosion were found at two concrete posts and in between the beam and wall of the residential cottage. Found in the vicinity are unused 13 dynamite sticks (near the cottage) and accumulated burned commercial safety fuse.

The umili of Sagada say the act is inayan, lawa to burn a house.Similar to the Golden Rule, “Do unto others what you like others do unto you”, it is inayan that a person should not do any act that harms another. The belief of inayan exacts a return of bad misfortune to one who did an evil act or to members of the immediate family.

It is inayan that a house get burned much as the house is the dwelling of a family that binds the household and with the community together. A house is a structure that community people are accommodated when they visit members of the household who owns the building, so then it becomes an element of community composition. It becomes umipugaw, wada leng-ag na including the lot on which it is built, a living structure that has undergone rituals that the community performs starting from the construction of the post to the installation of the roofing to finishing where thanksgiving is done and people are invited to partake of the blessing and give thanks to God with the members of the family.

A house therefor is not just a material thing but a breathing essence of the culture of Sagada. It is sacred, valued collectively. So then it is disastrous and heartbreaking when a house is torn down, burned and much more when it gets exploded.

So then the burning and exploding the two structures at Kiltepan Viewpoint is condemned to the fullest. That whoever did the act has the eyes and the hands of the Unseen and All Powerful Kabunian who exacts justice and retribution on whoever did the evil and inhuman act and violated the rights of the property owner and the very culture of inayan and lawa of the people of Sagada.

Let this statement affirm our culture of inayan that forever be upheld, a living instrument of reminding and protecting rights of persons to their persons, to their properties; a binding, collective practice of community belonging and respect; an eternal and conscionable, intangible instrument of justice and peace to humankind.