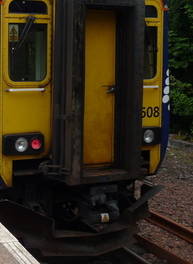 Three of the top ten most overcrowded services in Scotland already run on the East Kilbride line and passenger numbers are forecast to grow. Investment is needed.